Deathloop is special for a number of reasons. After its acquisition by Microsoft, it will likely be one of the last PlayStation exclusives we’ll see from Bethesda and its studios. The game is heavily promoted for this reason. Here and there you even hear that there is too much promotion. That is special for an Arkane title, because although previous games were a success with the reviewers, there was no real sales success, which many believe was due to a lack of marketing. Will this be the title that can break the ‘immersive sim curse’ for Arkane?

Deathloop is undeniably a child of developer Arkane Lyon: large, open fps levels, dripping with style. Beautiful costumes that wouldn’t look out of place on a catwalk and layered characters that populate a complicated scenario. The world and the systems from which it is connected play as big a role as the characters who live in it. The game is more reminiscent of Dishonored than Prey, and many of the main character Colt’s powers have been taken over with some minor tweaks. Deathloop’s setup is much more streamlined than Dishonored, which benefits the game.

Each loop a layer

First of all, the set-up, which despite the many layers and twists of the story itself, can be explained in a few sentences. The player is trapped as Colt on a mysterious island and in a time loop, where he repeats the same day over and over. After each death or the passing of the day, he wakes up on the beach in the morning. To break the loop, he must kill eight targets before the day is over, meanwhile the enigmatic Julianna is after Colt as she tries to maintain the time loop. Simple right? Not quite. 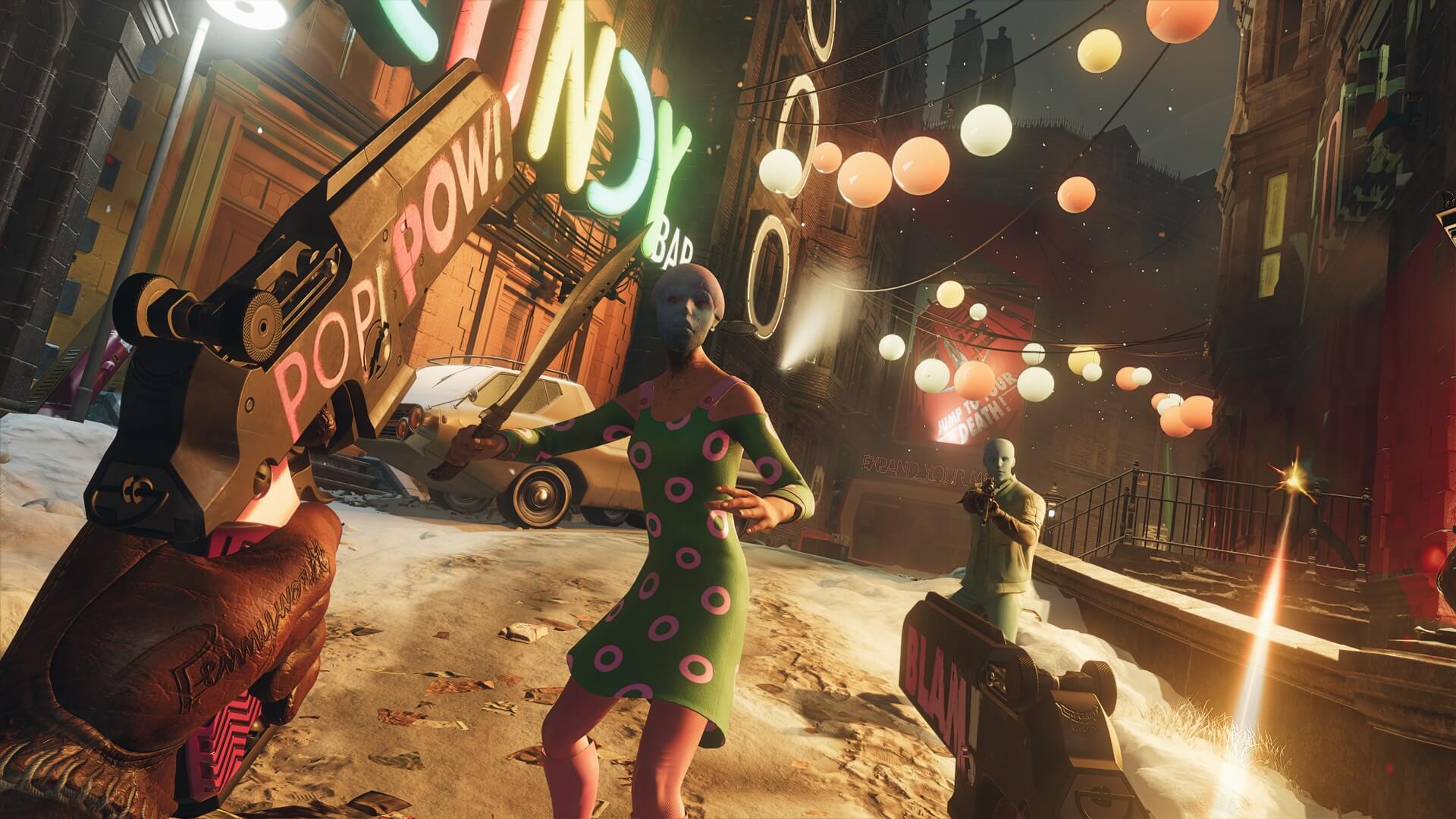 In this way, Arkane Lyon has put together an ingenious murder puzzle, where you learn something new every time you go through the time loop. Even if you get killed by Julianna in between or fail to complete a loop, you’ll undoubtedly have learned something to apply in the next round. In the beginning of the game you still lose all your items every new round, but soon you unlock a way to bind them to you with a material called residuum. Expanding your arsenal and knowledge in this way is surprisingly addictive. Combined with the incredibly well-designed levels, you keep discovering new things every time you unlock a new power, for example.

What is going on on the island anyway that is causing the time loop?

The relative lack of locations doesn’t break the game, and that’s the best compliment Arkane could wish for here. The balance between the island meta-puzzle and time loop, stealth, action, story and characters jumps continuously and keeps you hooked until the very end. Why does Colt want to break the barrel? What is his relationship to Julianna, who clearly knows him? And what is going on on the island anyway that is causing the time loop? It’s a well-crafted mystery, where not everything is as it seems. That Arkane Lyon can achieve this with such relatively limited resources deserves nothing less than a huge compliment.

Colt is fortunately not the least, and already starts the game with one of the main forces. This slab, as the powers in Deathloop are called, essentially gives Colt two extra lives. When you are discovered by the inhabitants of the island and inevitably surrounded and killed, you are twice transported back in time. The third time you are really dead and the time loop starts again, without your weapons and items. Later in the game, your corpse will also be left behind with your collected residue, so that you can retrieve it in a souls-like way. Provided you can get to your corpse, and only if you’re still in the same barrel.

The remaining slabs are owned by your targets, and can be individually upgraded by killing your targets a second and third time. Unlike Dishonored, you can only equip two powers at a time, forcing you to make smart choices. Colt has a handy hacking tool that lets you disable cameras and have movable turrets fight for you. A grenade that doubles as a booby trap and a machete for stealth kills.

Everything customizable, but not overdone

In addition to his powers and tools, Colt has a nice arsenal at his disposal. Most standard FPS weapons are represented, with a few cool exceptions in between. You can dual-wheel weapons, which is always fun. To add even more variety, the weapons have different rarity levels. The top two levels have special properties. You come across the second highest purple variant quite regularly, but for the very best weapons you will have to search really well.

Deathloop is definitely not Borderlands or Diablo

Both Colt’s abilities and weapons are still customizable with trinkets, which follow the same color scheme as the weapons. Think of double jumps, trinkets to heal faster, get your powers back, and a few special ones with very handy modifications in between. Your weapon upgrades are also surprisingly strong in the right combinations. This variation gives you an insane amount of ways to handle situations. Deathloop is definitely not Borderlands or Diablo, there are only a limited number of weapons to find, with fixed locations in the world and time. As with the powers, for the weapons and trinkets, Arkane looked closely at what it wanted to offer the player and what not. As a result, the offer is never cluttered or disturbing and there are actually no bad upgrades in between.

Here and there the game can feel slightly frustrating, especially because Colt isn’t exactly a powerhouse. Despite the fact that the focus is more on action than previous games – clearly noticeable in the weapons and powers that Arkane has selected – I still notice that I prefer a more stealthy approach by default. When discovered, you’ll be surrounded in no time at all, and despite being set back twice a bit earlier (usually out of the picture of your attackers), Colt is just dead very quickly. The invasion mechanism around Julianna can also sometimes contribute to this.

Julianna is Colt’s main opponent alongside all the islanders. He tries to break the time loop, she wants to keep it going. After Colt’s first round through the time loop, you can play as Juliana yourself and try to kill other players. Julianna has a few decent weapons by default and a unique Masquerade bib that allows her to look like a normal islander. She also has a nice progression tree of her own that rewards you for killing Colt as inventively as possible. It’s a nice addition to the game on some minor issues with players with poor internet connections and gives you a different perspective on the world of Deathloop. When you suddenly find yourself opposite a human-driven Julianna as Colt, you beep differently.

If it doesn’t work the first time…

Especially when Julianna appears when you are just trying to sneak through a large group of enemies, you have to be careful. It’s not nice to have to beat off an opponent with powers and a lot more health points at such a moment. On the other hand, she carries a random bib, a good gun and some trinkets, which she drops when you defeat her. But then you have to be able to pick it up between the sea of ​​opponents that has gathered around her corpse. Dying at such a time and as a result losing the items you have not yet secured can be quite frustrating. Fortunately, you usually have discovered something new to at least keep the feeling that you are continuing to make progress. 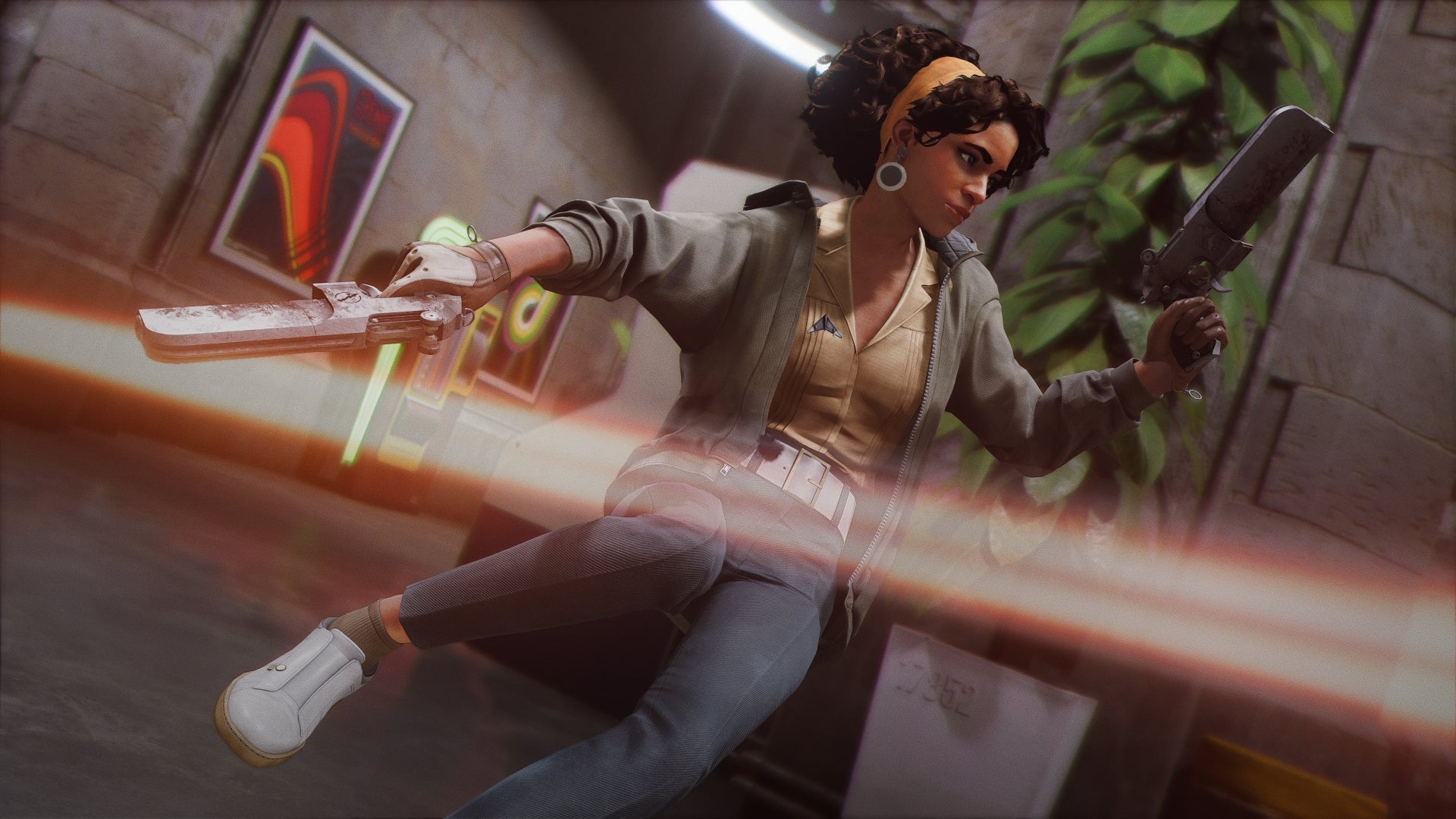 You can choose to go offline, then Julianna is still quite dangerous. Handy players will be able to lock her in a corner, because it remains difficult to program AI well for such complicated terrain. No doubt we’ll see the most awesome ways to exploit Deathloop’s mechanics in a few weeks. That’s kind of the fun of these type of games. Once you know how the game works, you’ll probably be through it in no time. But before you reach that point, you are many exciting hours ahead.

In multiplayer, an invasion of Julianna is really something to watch out for. Unlike the AI, online players are much more difficult to eliminate and you will have to pull out all the stops to beat someone. This feels like a real victory when you have the upper hand. On the other hand, it is quite frustrating to lose out and have to start the loop again when you were just working on something important.

The graphics and sound have been given just as much attention as the rest of the game. On PlayStation 5, you can choose from three graphics options: 60 FPS with variable resolution, 60 FPS with frame drops and 4K resolution, or 30 FPS with ray tracing. Raytracing looks formidable, but it must be said that Deathloop plays a lot nicer at 60 FPS. The environments are full of small details and feel exceptionally lived-in. Everything is topped with a delicious 70s retro sauce and as said, the designs are one of the game’s strong points. The characters are all unique, and the voice acting is just as important a component as the design.

All the characters have excellent voice acting, who clearly played their part with pleasure. During gameplay, you will regularly encounter audio logs and other recordings of characters. Everything is presented in a convincing way. Because many of these logs, as well as Julianna’s voice, come from the speaker of your PlayStation 5 controller, the whole thing gets an extra dimension. The feedback from the shoulder buttons for the weapons also feels good, although you can debate whether it really adds much.

The weapons all sound excellent and the sounds in the environment really immerse you in the game. Deathloop’s music is alternately gloomy and mysterious and then again jazzy and up-tempo during the action scenes. The action in particular is excellently accompanied by the music. The quiet scenes are slightly less memorable, but the whole contributes well to the special atmosphere that Deathloop conveys.

With Deathloop, Arkane Lyon brings us an evolution of the gameplay where the studio has gathered a large fan base. The attention to level building, gameplay details, style and story makes Deathloop feel very polished. Games in which so many systems all work together are rare. It’s insanely difficult to get that working properly and with Deathloop it seems like Arkane is playing this out with playful ease. I hope Deathloop will be the game that breaks this immersive sim curse for Arkane. Deathloop is exciting, intriguing, unique and plays like a dream. Anyone who likes FPS games, stealthy or action-packed, would do well to get this title.