US Open 2021: Emma Raducanu, from “intruder of the lot” to “superstar in the making” 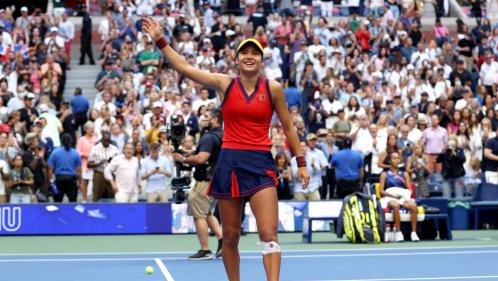 At Wimbledon, stifled by the pressure, she had given up in the round of 16. Two months later, Emma Raducanu, 150th in the WTA rankings, becomes the first player in history from qualifying to win a Grand Slam by winning the US Open. At 18, she established herself as the radiant new face of women’s tennis.

For her first participation in a Major, on her home turf at Wimbledon, Emma Raducanu was suddenly dizzy and plagued by respiratory problems, against Australian Ajla Tomljanovic. The woman who was then the 338th in the world explained after her discomfort “having probably mismanaged stress by playing in front of such a large crowd”.

Commenting for ESPN, former champion John McEnroe had estimated, even before his explanations, that Raducanu had “a little too much” weight on the shoulders, “inviting him to learn” from this moment. He was far from imagining the rest.

It is clear that eight weeks later, Emma Raducanu, who became the youngest winner in Major since the Russian Maria Sharapova, at Wimbledon in 2004 (17 years old), quickly learned to control her emotions. This was vividly seen in the final against the other “teenager” Leylah Fernandez, 19, who also caused a sensation during the fortnight. As in her previous nine matches, she won in straight sets (6-4, 6-3), becoming the first Briton to win a Major since Virginia Wade in 1977 at Wimbledon. A feat which earned him congratulations from Queen Elizabeth II: “It is a remarkable achievement at such a young age, which is a testament to your hard work and dedication”.

‘I have no doubt your outstanding performance, and that of your opponent Leylah Fernandez, will inspire the next generation of tennis players.’

No one knows how the young woman will be able to manage this new media exposure. But Raducanu, who appears in the latest British edition of Vogue magazine, is already “bankable” since she has signed partnerships with equipment manufacturers Nike and Wilson, but also the jeweler Tiffany & Co. Child, Emma was nevertheless “shy “and felt a bit” the odd one out, “she told the magazine.

Born in Toronto to a Romanian father, Ian, and a Chinese mother, Renee, she was two when they moved to England to pursue their careers in finance. In Bromley, city of greater London where David Bowie, who sang the merits of another “China Girl”, also grew up, Raducanu is of the intrepid type, alternating ballet, horse riding and even karting. “I was the only girl in my group to do it and motocross too, I thought it was pretty cool. Once my motocross teacher said to me ‘well, let’s do push-ups’. I was the only one. to be able to do them, I was proud of myself “.

Yet it is in tennis that she has a glorious future, when she is barely five years old. “Emma was having the discussions with the coaches. We couldn’t believe it. I remember thinking we would see her one day at Wimbledon,” her then teacher Rebecca Rodger told The Times. History has proven him right.

Talent is not everything, Raducanu explained this week to Flushing Meadows that his mother “instilled in him from (his) young age work and discipline”. She also says she was also inspired by Li Na, the former Chinese player who won Roland Garros in 2011, “just by the way she was a fierce competitor”. Without knowing yet that she would reach the top a few days later, she declared: “My parents have high expectations for me. I have always tried to live up to it”.

Former champion Martina Navratilova, she had already announced during the tournament: “She is a superstar in the making. We don’t want to put too much pressure on her, but she has this thing that we saw the first time. with (Rafael) Nadal, (Novak) Djokovic and that we see for (the 18 year old Spaniard) Carlos Alcaraz. It’s there before our eyes. She was born for that “.