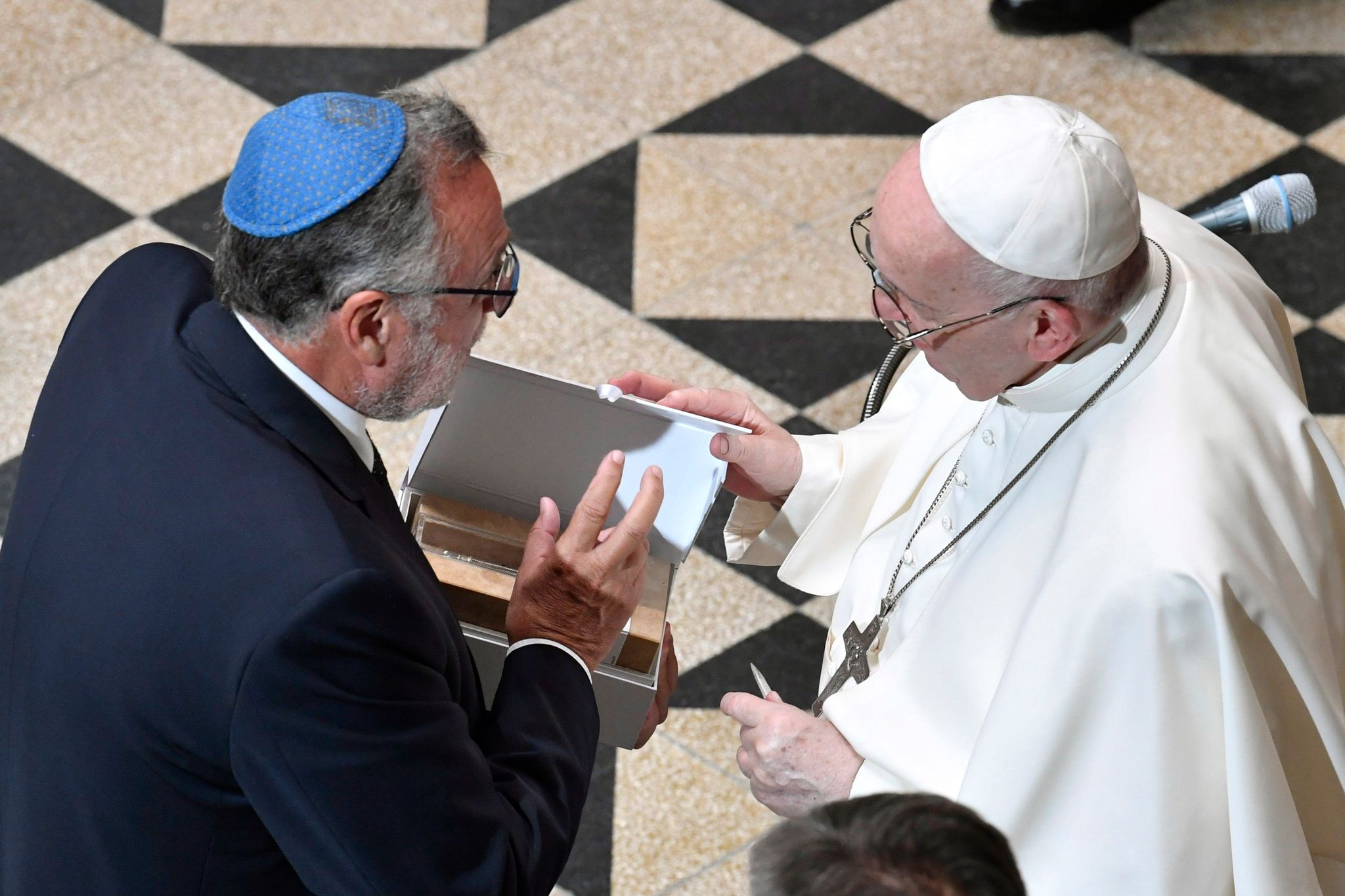 Remember the past to envision the future. Barely arrived in Budapest, the Hungarian capital, Pope Francis launched on Sunday, September 12 in front of Hungarian Jewish and Christian leaders, a vibrant appeal against anti-Semitism.

→ INVESTIGATION. Pope Francis in the land of Viktor Orban

The Pope thus condemned the “smells of hatred” which want to “destroy” the fraternity. “I am thinking of the threat of anti-Semitism, which is circulating in Europe and elsewhere. It is a fuse that must be extinguished, ”he said, at the very beginning of a Hungarian stage of a journey which must continue, from Sunday afternoon in Slovakia.

The situation of Jewish communities in Europe will also be one of the central themes of the trip, since Pope Francis also plans to meet, Monday, September 13, Jewish officials from Bratislava. The Jews of Hungary, who number between 75,000 and 100,000 today, living mainly in Budapest, have been hit hard by the Holocaust. Between May and July 1944, 440,000 of them were deported to the extermination camps, in 148 freight trains. Among the survivors of the concentration camps – “the most obscure and depraved abyss of humanity,” the Pope said – are the writers Elie Wiesel and Imre Kertesz, both Nobel Prize winners in literature.

But it is another poet that the Pope chose to summon Sunday morning. “I quote, among others, a great poet of this country, Miklos Radnoti, whose brilliant career was shattered by the blind hatred of those who, only because they were of Jewish origin, initially forbade him to ‘teach and then took him away from his family. “

“The temptation to absorb the other”

During his speech, delivered at the Museum of Fine Arts in Budapest in front of about sixty people, a stone’s throw from Heroes’ Square where he was to celebrate the closing mass of the Eucharistic Congress in Budapest, the Pope continued: “Each Once we have had the temptation to absorb the other, we have not built but have destroyed. Likewise, when we wanted to put it in a ghetto, instead of integrating it. “

→ CONTEXT. Eucharistic Congress in Budapest: the meeting place for the highest figures of the Church

Pope Francis also encouraged religious leaders, Jews and Christians, to “remember the past” while being “rooted in listening to the Most High”. It is in this way, by being “the roots of peace and the leaven of unity” that “we will help our contemporaries to welcome and love each other”. Before adding: “It is only when we are roots of peace and seeds of unity that we will be credible in the eyes of the world which looks at us. “

During this plea for integration, the Pope never made an explicit allusion to the Hungarian political situation, nor even sketched a parallel with the situation of migrants, which constitutes a major sticking point between the Hungarian prime minister. , Viktor Orban, and him.

It is nevertheless this theme of the reception of migrants and the differences of opinion between the Pope and the Prime Minister, which has been focusing attention for several weeks. The two men also met briefly on Sunday morning during an interview from which nothing was filtered, but which took place in the presence of the Hungarian President, János Áder, of the Deputy Prime Minister Zsolt Semjén as well as of Cardinal Pietro Parolin, Secretary of State for the Holy See, as well as Bishop Paul R. Gallagher, the Pope’s Minister of Foreign Affairs. The meeting lasted about 40 minutes, and took place in a “cordial” atmosphere, according to the official Vatican statement.

→ UNDERSTAND. Hungary against the right to asylum

The first hours of the papal visit to Hungary were in any case marked by relative discretion. Reception at least at the bottom of the plane, entirely empty roads along the passage of the papal convoy, between the airport and the center of Budapest. The roads had also not, with rare exceptions, been paved. On the other hand, in the Place des Héros, where the Pope was preparing to celebrate Mass at the end of the morning, the Pope did indeed find the crowd gathered under the great September sun.