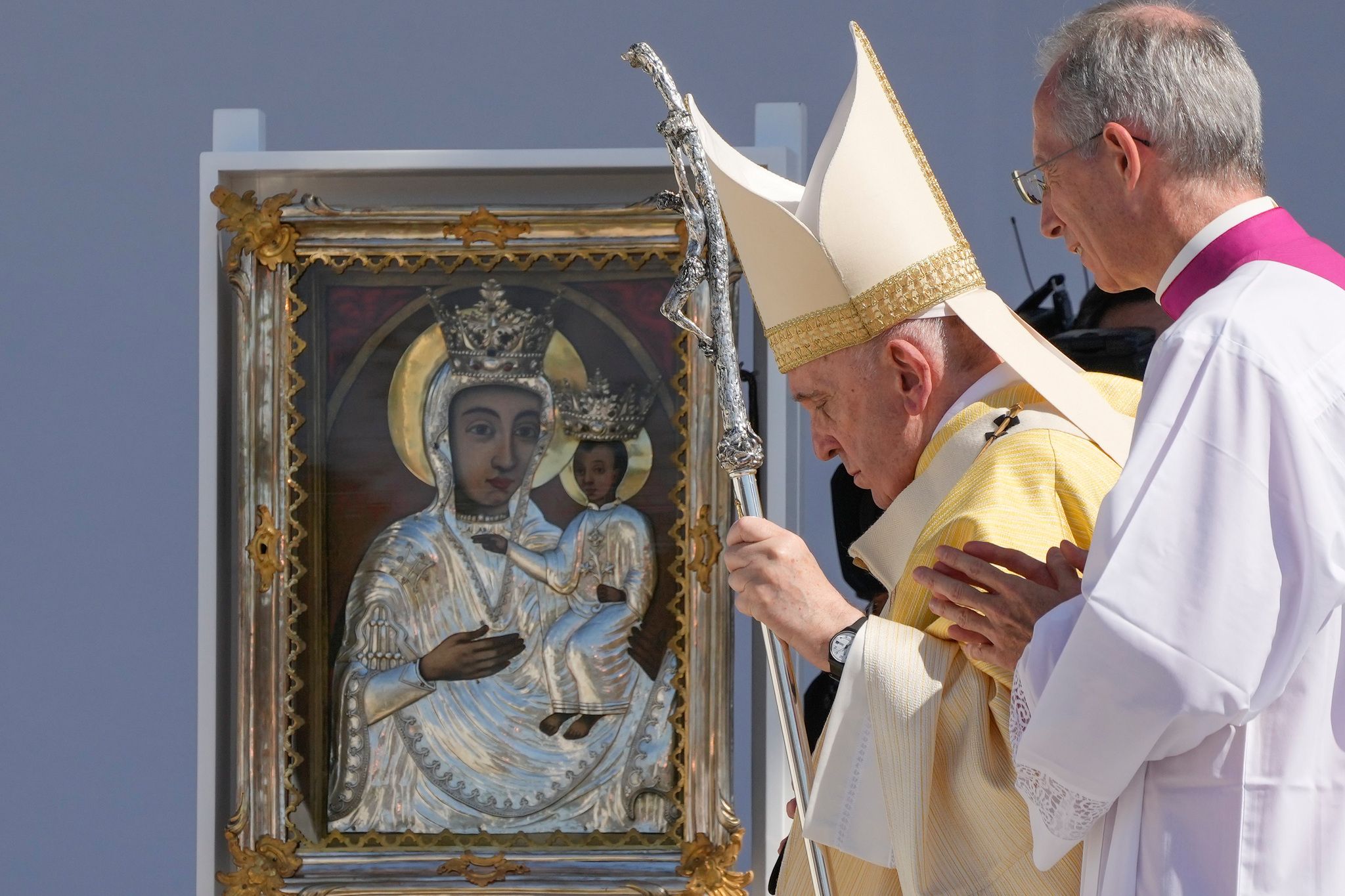 “Jesus shakes us up, he is not satisfied with declarations of faith! “. In front of the silent crowd gathered under the sun on Heroes’ Square in Budapest, Pope Francis continues: “He asks us to purify our religiosity. By closing the International Eucharistic Congress held in the Hungarian capital on Sunday, September 12, on the first day of a trip that was to take it a few hours later to Slovakia, the Pope sent a clear message to Hungarian Catholics. That could be summed up as follows: it is not enough to say that you are Catholic, you still have to let yourself be “led” by Jesus.

→ READ. Eucharistic Congress in Budapest: the meeting place for the highest figures of the Church

Francis thus exhorted the 100,000 faithful who listened to him not to reduce Christianity to “the defense of our image”, but to make it a “liberating decentering”. Words spoken just after meeting Hungarian Prime Minister Viktor Orban, whose convictions on welcoming migrants are the exact opposite of his. “I asked the Pope not to let Christian Hungary get lost,” the head of government wrote on Facebook after this formal 40-minute interview.

The reception of migrants has not been addressed

During this interview, described as “cordial” by the Vatican, Viktor Orban gave Francis a copy of a letter sent in 1250 by King Béla IV to Innocent IV. In this letter, the Hungarian king begged the then Pope to help him face the Tatar invasions which threatened Christian Hungary. The choice, owing nothing to chance, has fueled the chronicle of this expected and commented meeting, in Rome as much as in Budapest, for weeks.

→ REPORT. “It is a pain that he does not stay longer”: in the crowd that came to welcome Pope Francis

In Hungary, the Pope has never directly addressed the reception of migrants, but he made several clear allusions to the need to welcome the other, while assuming Christian “roots”. “The cross, planted in the ground, in addition to inviting us to take root well, raises and extends”, hammered Francis during the Angelus which followed mass, before encouraging those who listened to him to be “anchored” and open, rooted and respectful ”.

On several occasions, he also extolled the merits of diversity in society. This was the case before the bishops of Hungary. “Diversity is always a bit scary,” he conceded. A fear to which we must not give in. “In the face of cultural, ethnic, political and religious diversity, it is possible to have two attitudes,” he argued, “to close us in an attitude of rigid defense of what we call our identity, or to open ourselves to meeting with the other and cultivating together the dream of a fraternal society ”.

To support his call to brotherhood, Pope Francis made extensive reference to Hungary’s past, and in particular to the situation of Jewish communities. If the 75,000 to 100,000 Jews living there today maintain good relations with the government in place, which supported the construction of several synagogues, they remain very deeply marked by the Shoah. Between May and July 1944, 440,000 Jews were indeed deported to the extermination camps – “the most obscure and depraved abyss of humanity”, affirmed the Pope -, including the writers Elie Wiesel and Imre Kertesz were survived.

However, the Pope reminded the religious leaders, Jews and Christians, today we must learn from this dramatic history. “Each time we had the temptation to absorb the other, we did not build but we destroyed”, he insisted.

So Francis condemned the “smells of hatred” which want to “destroy” fraternity. “I am thinking of the threat of anti-Semitism, which is circulating in Europe and elsewhere. It is a wick that must be extinguished. This is why, continued François, religious leaders must be “the roots of peace and the leaven of unity”, in order to “help our contemporaries to welcome and love each other.” A demanding program.

What a worm can do against Covid-19

SNCF: the tariff advantages of the railway workers will not disappear, assures the CEO Jean-Pierre Farandou

SNCF: the tariff advantages of the railway workers will not disappear, assures the CEO Jean-Pierre Farandou