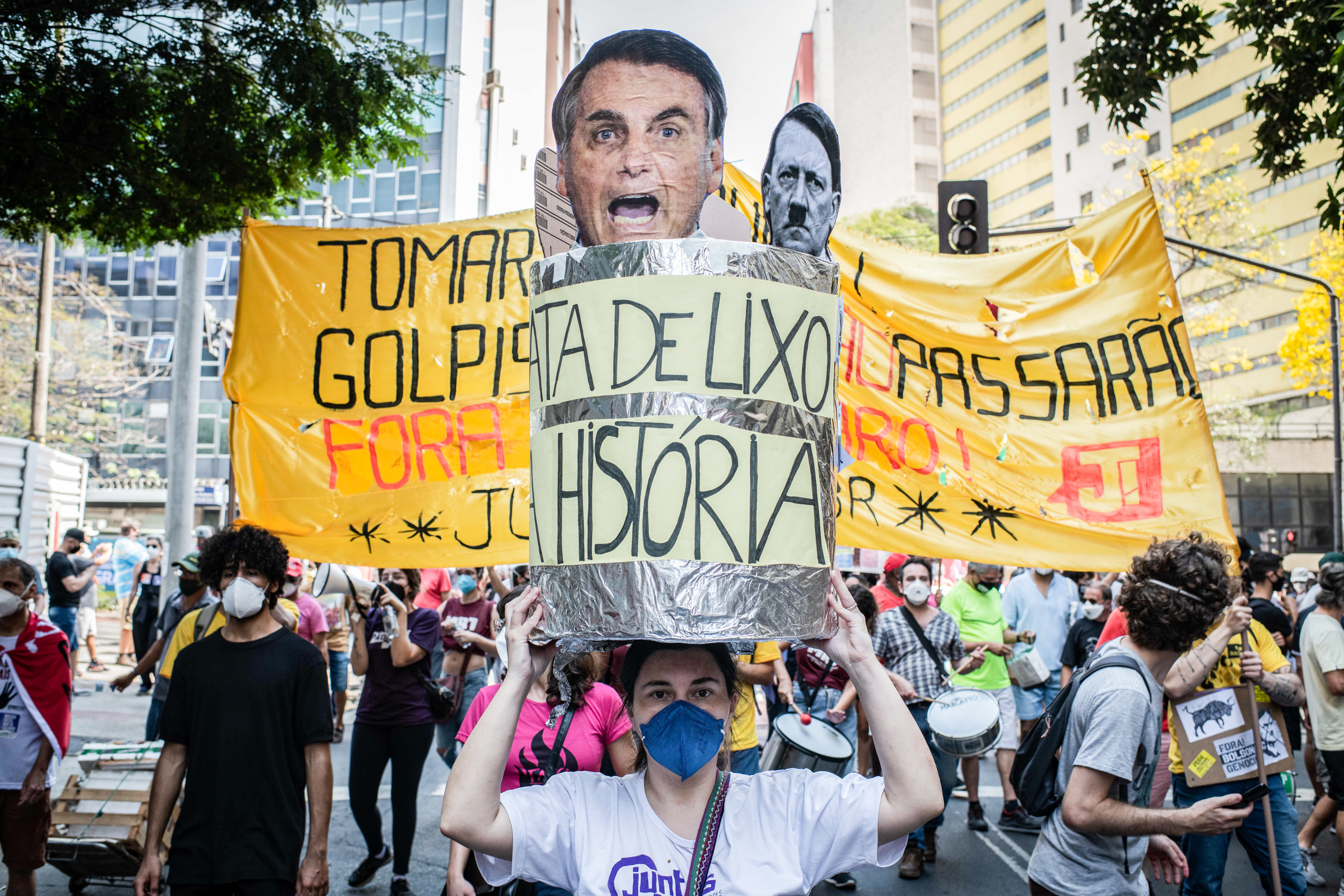 Brazilian political groups that occupied opposite trenches not long ago began to rehearse a union in the face of the authoritarian escalation of President Jair Bolsonaro. This Sunday, conservative and progressive figures will march in 17 cities to demand the removal of the president. But the gap that divides the country in half is not so easy to overcome and prevents further adherence. The main opposition party, the Workers’ Party (PT), has announced that it will remain on the sidelines. He refuses to go out to the streets alongside right-wing groups that helped remove Dilma Rousseff from the Presidency or that celebrated the imprisonment of Luiz Inácio Lula da Silva for Operation Lava Jato.

The protests on September 12 were organized in July by conservative and liberal groups unhappy with Bolsonarist policies, including the Free Brazil Movement (MBL) and Vem para a Rua (Come to the street), initial promoters of the marches to kick Rouseff out. His initial motto was “Neither Lula nor Bolsonaro”, in reference to the two names that are expected to enter the fray in the 2022 elections. The center-right is looking for an alternative candidate to the duo but so far without success.

If this Sunday’s demonstrations are successful, they could strengthen a hypothetical third candidate. But at the last minute, that slogan was withdrawn in an attempt to attract left-wing opposition. But neither the PT nor the Socialism and Freedom Party (PSOL), further to the left, will send representatives. But some deputies from progressive parties and the pre-candidate for president Ciro Gomes (Democratic Labor Party, PDT), have promised to be present at the São Paulo event.

Among analysts, party leaders and activists, there is a demand that the left that has been demonstrating in favor of the impeachment since May 29 join the demonstrations called by the right – which, for its part, is practically absent. added to the previous acts. But there is a mutual distrust. The progressive side does not see any legitimacy in an act carried out by the MBL, a group that, according to its opponents, used the same Bolsonarista tactics of defamation of figures on the left in the networks. For its part, the conservative and liberal side seeks a distancing from Lula, accused of seeking the leading role only for him, and glimpses an intention of the PT to empty the events of September 12.

Despite these obstacles, the discourse on both the right and part of the left is that the moment demands putting aside differences and building a unified act in defense of democracy. “The similarity with the movement“ Diretas Já [histórica movilización que luchó por el voto directo al final de la dictadura militar]. This has been our position ”, explains Mano Ferreira, co-founder and communication director of Livres (Libres), one of the organizers of the event.

Despite the fact that the MBL has released a statement in which it asked to go out in the street in white, to avoid colors that symbolize any political trend, Ferreira says that it is “beautiful and natural” for people to express their political positions through of the colors and flags of the parties. It is also the moment to recognize the legitimacy of the adversary, he argues. Even so, he reflects: “It is desirable to put aside the electoral discussion so that we can make a joint defense of the impeachment process. If we defend the value of democracy and want to defeat Bolsonarism, there is no place for personalism or purism ”, he explains.

Space for the “third way”

The argument that now is not the time to think about electoral calculations is repeated by all the people consulted. However, the acts of September 12 also open an opportunity for the candidates of the so-called third way – who try to break the polarization between Bolsonaro and Lula. In Avenida Paulista, in addition to Ciro Gomes, will be present the former Minister of Health of Bolsonaro Luiz Henrique Mandetta (DEM) and the former presidential candidate João Amoedo (Novo Party), who plan to run for the presidential elections.

“Those who are really in favor of the impeachment process have to turn to creating a consensus on a single issue: ‘Out with Bolsonaro,” defends Ciro Gomes, who was third in the previous presidential elections with 13% in the first round. Remember that the progressive opposition has about 130 of the 513 votes in the House and has been successively defeated and does not have enough congressmen to undertake a political impeachment process. “We need to convince more than 200 deputies from the right and center right. Therefore, we need to dialogue with those who are different, ”he says. “I believe that all Brazilian democrats, shoulder to shoulder, have to mobilize Brazilian society to create the environment for the impeachment process,” he concludes.

Deputy Gleisi Hoffmann, national president of the PT, says that the party intends to participate in rallies with its historical rival, the Brazilian Social Democracy Party (PSDB), and other center-right acronyms in the acts in favor of Bolsonaro’s political prosecution. for October 3 and November 15. “We want to build an act with parties with whom we have disagreements, but which participated in the entire process of democratic reconstruction in Brazil,” proposes Hoffmann. “However, the demonstration called for September 12 had a different character,” he adds, referring to the slogan “neither Lula nor Bolsonaro.” “They ended up changing it at the last minute, but it didn’t get echoed everywhere. For this reason, we believe that it is important that the event be held, we encourage these events, but the PT will not participate ”, he explains.

Despite the fact that the PT is a signatory to impeachment requests and has led thousands of militants to acts of opposition against the president, there is an idea among political analysts that Bolsonaro’s removal at this time is not a priority for Lula , which leads the polls by a wide margin. The best thing for the former president, in political terms, would be to let Bolsonaro bleed to death to reach the elections with an even greater rejection and the legendary PT leader to become the most viable option in the democratic field. “Lula depends on Bolsonaro’s presidency as a political zombie to impose the absolutely demagogic simplification that he is the only way out to oust Bolsonaro,” says Gomes, a former ally of Lula and now a political rival.

There is another idea behind the scenes: the removal of Bolsonaro would remove Lula’s main rival from the electoral contest. Although he may be defeated by another candidate from the right, there is confidence that the PT will be the winner in any contest. If the dismissal is not carried out, the PT trusts that there will be a broad coalition around Lula, to isolate Bolsonaro.

Hoffmann refutes the idea that the PT prefers Bolsonaro as an opponent and denies that he sees the acts and the impeachment process by making electoral calculations. “The vision of the match is the following: we do not choose competitors or opponents. For us, going to the elections means having a clear program for Brazil. That is what will give Lula victory ”, he guarantees. Regarding the dismissal, he clarifies: “For a matter of defense of Brazil, of the Brazilian people, Bolsonaro has to leave. He commits crimes of responsibility and for us that is fundamental ”.