The Google data ‘highway’ that will link Spain and the US through 6,600 kilometers is anchored in Bizkaia 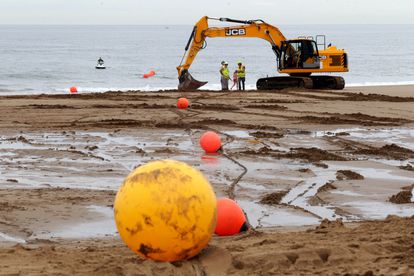 There are large infrastructures that do not have the size of a port or the majesty of a bridge, but that are even more crucial in an increasingly interconnected world. Grace Hooper, just a two-centimeter diameter hose that covers 16 pairs of fiber optics, was anchored this Thursday on a beach in Sopela, about 18 kilometers from Bilbao. Under the ocean and through 6,600 kilometers it will connect Spain with the coast of Cornwall, in the United Kingdom, in the coming months, and it is expected that by 2022 it will reach New York City. The submarine cable is a bet by Google to improve data traffic, as announced by the company, and will have the capacity to transport 340 million megabytes per second, the equivalent of 17.5 million people transmitting 4,000 videos at the same time, according to explained María Álvarez, head of institutional relations of the company.

The cable laying works began at around 10:30 am on Arrietara beach (popularly known as La Salvaje). On an unpleasant morning, without bathers, and in front of fifty people including journalists, authorities and technicians, the workers have excavated an area of ​​the sand in which the infrastructure will be anchored. From now on, a cable ship will host Google’s hose along the seabed until it completes its journey off the British and US coasts. It is the first investment made by the technology giant in a submarine cable route that links Spain. with the UK. This cable will also form part of an extensive mesh of fiber cables that travel along the seabed in the world, where more than 400 of the same characteristics are already installed.

Currently, 98% of global internet traffic circulates through submarine cables, underscoring the importance of these infrastructures in a world even more digitized by the pandemic. In total they exceed 1.1 million kilometers, three times the distance from the earth to the moon or 27 times the diameter of the equator. Google has chosen in this case to undertake the adventure alone – instead of acquiring existing capacity or building it with several partners – to adapt the routes to the latency needs of its clients – the time necessary for the information to get from one point to another -, create new connections (as happened with Curie) and offer greater stability on the routes. 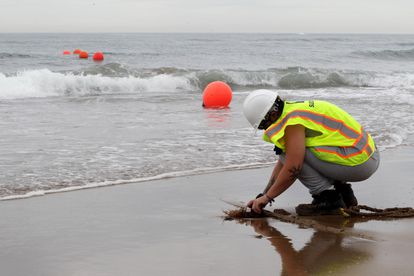 The cable will become the 28th to be laid somewhere in Spain, according to data from the specialized company TeleGeography, and the first to be launched by Google alone. The infrastructure has been named after Grace Hopper in honor of the American mathematician Grace Brewster-Murray Hopper (1906-1992), a pioneer of computer programming. This mathematics was fundamental for the development of the COBOL programming language. Other Google cables are also dedicated to famous people, such as Curie (by the Polish scientist and double Nobel laureate Marie Curie) or Dunant by Henry Dunant, Swiss philanthropist founder of the Red Cross.

At the bottom of the sea these submarine cables have the diameter of a hose through which information travels by fibers the thickness of a hair. Grace Hooper, according to the company, will also incorporate fiber optic switching technologies, which, according to the company, contribute to “improving the reliability of communications” by facilitating the movement of traffic in the event of outages. Bikash Koley, vice president of Google Global Network, assured when presenting the project last July that Grace Hooper will be the first submarine cable in the world to use this technology, which they hope to implement in future projects.

The launch of this cable is the first of a series of similar installations that will be promoted in Spain in strategic points along the coast, such as Barcelona or Algeciras, as explained by Arturo Azcorra, general director of Telecommunications of the Ministry of Economic Affairs and Transformation. Digital. In Spain, a total of 28 cables of these characteristics are tied up. It is a country, Azcorra said, that has “quite favorable conditions for laying submarine telecommunications cables because it has many kilometers of coastline and is a strategic point that acts as a bridge with the rest of Europe, America and Africa.”

The installation of the Grace Hopper cable will provide “great advantages” to companies and users in Europe and the US in the use of Google services, has assured Miguel Escasi, director of public policies of Google Spain, and in general in any service based on the data traffic. When it is at full performance, “it will increase the reliability of the service and offer high levels of speed and flexibility of the network, in addition to growing the capacity and power of Google services,” added Álvarez. The cable, both explained, comes equipped with security features “above international standards” that make it safer against possible cyber attacks. The company has not wanted to make public how much the investment in the project amounts to.

The anchoring and installation of the Grace Hopper has been carried out under the technical direction of Telxius, Telefónica’s communications infrastructure subsidiary. The cable gains access to the fiber optic interconnection facilities that Telxius has in Derio (Bizkaia), with connections to Paris and Madrid. This will be the second time that Bizkaia has been selected to carry out a project of this technological scope. Since 2017, Sopela has served as a connection point with Europe through the cable called Marea, a high-capacity transatlantic network for the Internet of Microsoft and Facebook and in which Telxius also participates. Through this route the connectivity node of Virginia (USA) – near the Facebook data center in Rutherford (North Carolina) – is linked with southern Europe and, from Sopela, with the rest of Europe, Africa , The Middle East and Asia. With a capacity of 160 terabytes per second, it is 16 million times faster than a home connection. 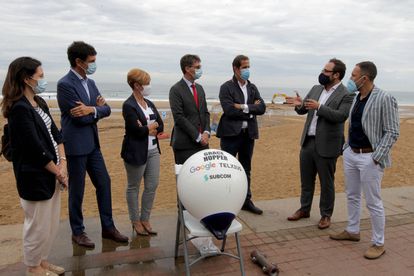 Institutional representatives and those responsible for Google, this Tuesday in Sopela (Bizkaia) during the start of the laying of the Grace Hopper submarine cable.Fernando Domingo-Aldama

Hexa-X: the European 6G project will allow the construction of a virtual twin of the real world