Roombas and pets have a shared past. We have been seeing viral excerpts of that relationship for years. Cats mounted on them with the dignity of a charioteer on his chariot. Dogs barking at them in terror as if instead of a robot vacuum cleaner, the same demon had entered the room. Parrots, turtles, chickens and even ducks have been seen walking on the back of the machine manufactured by the American technology iRobot. But the darkest chapter in that long story – also available in YouTube annals – is the encounter between the robot and excrement.

Small pets leave little surprises. Now our robots will be able to detect pet waste and sort it out ”, explains Michelle Gattuso, iRobot’s vice president of product, during the presentation of the latest news from the firm. The new Roomba J7 +, which goes on sale today for 999 euros, promises to conquer this milestone, thanks to a front camera that allows you to identify objects in your environment and trace alternative routes without interrupting cleaning. This model of the classic robot vacuum cleaner, which will be 20 years old next year, will no longer run over, according to its promoters, dog feces or spread them on floors and carpets, nor will it get entangled in cables or suck up other unforeseen objects, such as cables. headphones, shoelaces or socks. “Many customers have told us that they feel they have to clean before passing the Roomba. This is no longer going to be the case ”, admits Gattuso. IRobot’s plan is to progressively expand the categories of objects that the device can recognize. 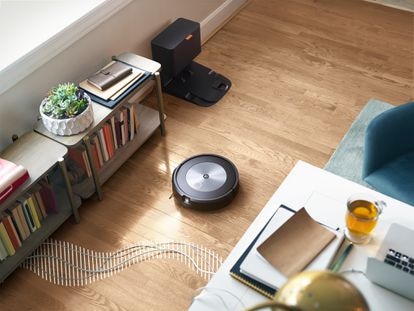 The images recorded by the vacuum cleaner on your cleaning expeditions do not have to leave the robot. In principle, these are processed on the machine itself to identify potential obstacles and will only reach the iRobot developers if the user consents to their use to improve its functions. “The robot works like a brain that makes decisions”, summarizes Gattuso. Not even the owners of the robot can access what their vacuum cleaner is registering, unless an incident occurs: in case of needing confirmation that an object should be avoided, the Roomba J7 + will send a photograph through the app so that the The user can verify if it is a temporary obstacle —such as a toy that has been left on the ground— or if it is necessary to define a new exclusion zone.

Other novelties of the new model are its base, somewhat lower than that of its predecessors, as explained by the company, to allow it to be placed under tables and save space; the metal finish of the robot, and a storage space for a spare bag in the base. The latter, by the way, remain the same as those used by previous models. According to Gattuso, there are no substantial changes in the robot’s motor, its battery or its suction capacity. “The key difference is their intelligence”, sentence. A new brain to improve them all

IRobot’s stakes for the new course are completed with an update of software for all vacuum cleaners of the brand that incorporate an internet connection: iRobot Genius 3.0. “It is an intelligent technological platform to establish an alliance between the robot, the home and the user”, explains Colin Angle, CEO of the company.

This pact of coexistence involves ensuring that the machines respect rules similar to those we impose on our human co-inhabitants: wash your hands before dinner, do not run around the house screaming … On the one hand, a do not disturb mode can be established so that, even if the robot has scheduled a cleaning, it remains inactive. On the other hand, at the moment of starting up, the Roomba will move the silence to the area to be cleaned and once its task is completed, it will return with the same stealth.

Vacuums incorporating this version of the iRobot software will also provide estimates of the time required to clean a specific space and also determine if their users are at home and start cleaning in their absence, through a connection to the phone’s location services. .

As for the relationships between human and machine, explains Angle, iRobot Genius 3.0 is committed to the establishment of preferences. “Asking the consumer to program the robot is very frustrating and inefficient,” he explains. Thus, the Roomba will ask questions about how it should perform its functions and will use the answers to update its own rules of coexistence. “And if you buy a new robot, you will have the possibility to transfer that knowledge. The more we understand your home and your preferences, the more it will be lost if you have to start from scratch with a robot that does not understand anything ”, Angle sentence.

They arrested the “Cadet”, alleged leader of the Northeast Cartel