Ian Gibson: “I keep crying for Lorca and for my brother” 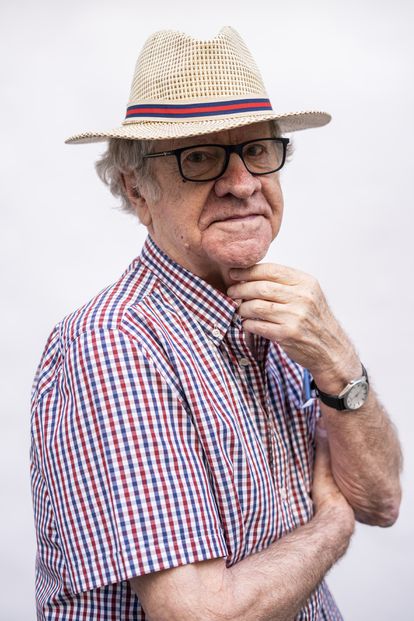 The passion for Federico García Lorca made an almost adolescent Ian Gibson (Dublin, 82 years old) an Irishman with a Spanish soul. And now he is Spanish, so he feels free to comment on this country of the poet. In 1978, with his book The assassination of Lorca under his arm, he came to Madrid without knowing where to keep the blankets he brought as basic luggage. For years he has lived in Lavapiés, which for him is the most beautiful capital in the world.

Question. Now he writes about his childhood …

Answer. It is a small book; it is called provisionally Never on Sunday. My family was Methodist, very puritanical, and on Sunday there was nothing we could do. We couldn’t even use the beautiful canoe we had! On Sunday we couldn’t have fun or buy anything. I grew up with this, with the prohibitions.

P. And against that has been your life.

A. Against that. Spain helped me to be somewhat freer, but I came with those inner voices: “You can’t do that.” The sexual subject was taboo in Ireland. I was freed by school, a boarding school for Quakers, the most liberal in the British Isles. That is the beginning of the book, which I write in Spanish.

Q. Why has it taken so long to count that time of prohibitions?

R. I did not dare to tell everything in a novel, South Wind, but I hid the whole Irish background. I made up the names. But this time I say it all.

“I grew up with the prohibitions of a very puritanical Methodist family.

Q. What truth has hurt you the most?

R. The relationship with my mother, so difficult. I was the second. My brother Allan was five years older than me. He was the preferred son, and I felt rejected by my mother. That is the bottom line. It was a very unhappy marriage. She despised my father, she said: “I can’t stand it. I want him to die ”. I wanted to say this in print, to alleviate this bitterness …

P. Have you cried writing it?

A. A lot, yes. I’m quite a crybaby. A little funky too. My tendency to run away instead of facing danger, which I have struggled with since I was a child.

P. Why have you cried more?

R. Because of the death of my brother. He not only turned out to be gay, but with a very strong sadomasochistic tendency, and he went crazy. He ended his days in a clinic. It was terrible for the family to have this problem at home. It helped me understand Lorca. Having a gay man in 1950s Ireland was terrible for a Puritan family. For my father, having a gay son was terrible; that and the quarrel with my mother ended his heart and his life.

Q. You have never said anything about Lorca’s connection with his brother in your personal experience.

A. No, but I dedicated to Allan Lorca and the gay world. I put him: “He couldn’t handle his dramons.” Dramon was the word that Federico used to refer to his bad times, to his frustrated loves, of which people did not know. Allan told me about his sorrows, those dramons.

In Spain the pending subject is historical memory “

Q. Did you tell your brother about Lorca?

R. He did not know anything about Spain, and I had been away for a long time when all this happened. When I started studying Lorca, they didn’t talk about his sexuality, especially here. The family did not allow access to the documents. Neither Francisco nor Isabel García Lorca, his brothers, allowed to touch the subject.

Q. And did Lorca talk about his homosexuality?

R. According to whom. At the end of his life he was freeing himself, but, as he was more and more famous, he fled more from the question. For that he had a lot of left hand. And the political right, by the way, still mocks this issue today.

Q. Was Lorca for you a human or literary spark?

R. All together. When I entered the play I began to think: “There is a lot here that you don’t know. Of death, of circumstances ”. It was a bottomless pit. He has death, he has New York, he has surrealism … Even today there is much to do, for example, when a Vox deputy says that the poet would give them his vote. Here the pending subject is historical memory. That ignorance leads right-wing politicians to say that they are up to the bow of the grave of the grandfather, referring to the dictator.

Q. What feeling did that allusion to Lorca give you?

R. It shows ignorance and evil with respect to the best known, most loved and most mourned poet. Say that Lorca was apolitical! In his time it was impossible to be apolitical! The poet who wrote the Romance de la Guardia Civil, the signer of anti-fascist manifestos!

P. For Lorca have you cried?

A. Yes, of course; it continues to move me. Last night i read 1910 (Intermission), one of his poems in New York, where he talks about the fertile plain of Granada, his lost paradise, and it made me cry because of the force of the images. And this childhood book, when dealing with my brother, also makes me cry. I feel like a child, crying. The feeling that I have never reached maturity. That is inside me, and that led me to Lorca, but also to Dalí, and to Machado… And now to my childhood.