Ian Gibson travels to the precipice ‘where memory ends’

The biographer of Lorca, Dalí and Buñuel does not want, “out of modesty” and “other things”, that their biography ever be written. “It does not interest anyone,” ditch. Nor does he consider autobiography honest, because “enough” details would be kept quiet. “I know from experience that nobody tells the truth in an autobiography”, warns the Hispanicist Ian Gibson in the documentary Where memory ends. The film, directed by the professor of the University of Vigo Pablo Romero-Fresco, has been the premiere that the Cans film festival (O Porriño, Pontevedra) opened this Thursday, and if it is not a biographical story, it is a a semblance of all that life of the Irish researcher dedicated to unearthing the memory of Spain. A country in which he was not born, but which he feels with “deep love and anger”. Also with “shame”, he affirms at least a couple of times throughout the tape. Shame for those “130,000 murdered people, victims of Franco” who are still “scattered throughout the country, in unidentified places.” And also shame for those still unrecovered remains of Federico García Lorca, because finding them would be the “great symbol” of reconciliation.

On Where memory ends, Gibson reveals the sound recording in which he recorded, in 1978, the explanations of the gravedigger of the poet from Granada at the scene of the execution. He also visits the Student Residence, that “European cultural paradise” in which the three stars (Lorca, Dalí and Buñuel) lined up to whom the writer has devoted his research vocation. In addition, it shows his refuge in the heart of the Lavapiés neighborhood, the place where he feels like in the womb and where he ended up with his family after the 19 moves he carried out in Spain after leaving Dublin. But the common thread of Pablo Romero-Fresco’s story is a trip to Las Hurdes (Cáceres), the natural region that Buñuel portrayed in 1933 in Land without bread, as a paradigm of poverty, backwardness and abandonment that plagued much of the Spanish countryside. 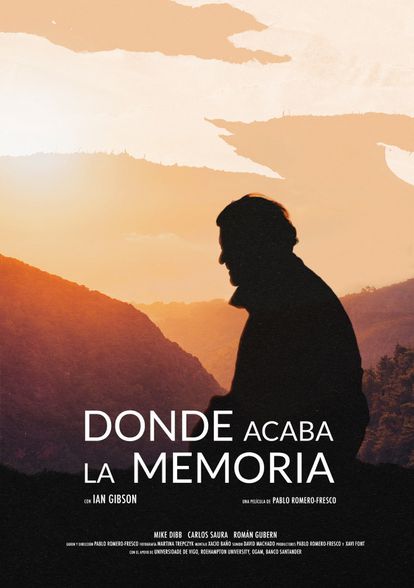 Poster of the film premiered this Thursday at the Cans Film Festival (O Porriño).

Entering through La Alberca, heading to the Peña de Francia or Las Batuecas … “only two hours” from the capital of Spain, the arrival of Ian Gibson awakens the old debate among those Hurdanos who defend that Luis Buñuel denounced reality as era and those others who claim that he falsified it at will and created a myth that even today the tourist buses arrive looking for. Yes, throughout the 52 villages with 8,000 souls that existed then, people slept with the animals and drank the cloudy water that flowed down the streets in streams, but some in the area argue that this happened the same in many other Spains of the moment.

The Hispanicist returns to some of the houses in the film, now in ruins. He meets with older neighbors such as Father Ángel (now deceased), Mr. Olegario, Mrs. Aurelia or Uncle Picho, an experienced beekeeper. He also investigates until he finds the enclaves of some of the crudest scenes, with three animals as victims, from the documentary by the Aragonese filmmaker. On Land without bread, there is a popular festival in which a rooster is hung and beheaded; a donkey carrying honeycombs is attacked by bees and a goat is brutally thrown off its feet. The last two events don’t just happen. The donkey was “a set up”, confirms Uncle Picho. And in the case of the goat, says Gibson, tired of the herbivore not rushing off the cliff as the script intended, it was Buñuel himself who shot him to make him fall: “He took out the gun and boom.”

Upon reaching this precise place, the Irish writer confesses his “emotion” and without thinking twice he climbs with astonishing agility to the top of the precipice. His friend, filmmaker Mike Dibb, who accompanies him, attends with concern: “It’s going to be harder to get down, Ian!” But the Hispanicist does not give up. It is known that he is driven by the same desire of his entire career: to pursue that memory that escapes as time passes. “Our memory is our coherence, our action, our feeling”, Gibson defends, “without it we are nothing”. Pablo Romero links this thought with the phrase from which he takes the title of his documentary: “History begins where the memory of the last living generation ends.” In addition to Dibb, other characters accompany this audiovisual journey through half a century of work by the Irish researcher, such as the writer Paul Hammond, the director Carlos Saura or the film historian Roman Gubern.

The film premiered this Thursday, September 2 at the Cans film festival (which celebrates its 18th edition until Saturday 4), with subsequent debate with Gibson and Romero, and will continue to visit some Galician cinemas and festivals until it reaches the Cineteca de Madrid October 4. It is the culmination of a work of almost nine years full of shocks that began at the Spanish film festival in London, in which the teacher and researcher from the Vigo Faculty of Philology and Translation acted as interpreter for directors and authors. There he met Mike Dibb, who had already worked with Gibson on documentaries about Lorca and Dalí. They had yet to carry out their project on Buñuel, and Dibb hoped to meet Pedro Almodóvar at the festival to ask for funding. Instead, he met Romero, who became first an editor and then a director of a film that was to be about Buñuel and ended up being about his biographer. Where memory ends It is also the latest fruit of Pablo Romero as a Ramón y Cajal researcher on translation and accessibility for deaf and blind people in the process of preparing audiovisual works (accesible filmmaking).

The tape was about to be shipwrecked when Romero-Fresco’s computer where he kept the montage of his recordings disappeared. “It had taken a year, between classes and research at the University of Roehampton [en la que trabajaba] to convert the 50 hours of footage that we had into a final cut of one hour, and it was stolen from me in my office, “he says. “That was the first of the many deaths of Where memory ends “, it states. Later, there was still time for her two children to be born and to change jobs and countries. “But a film about the perseverance of a life dedicated to the search cannot be abandoned just like that,” acknowledges the director, so three years after the robbery, he accompanied Gibson to Granada to present the latest edition of his book on the murder de Lorca, “in one more attempt to find the remains of the poet.” “The film could only end where it all began,” he reflects, the place where Gibson arrived 50 years ago to write his first work, which was banned by the Franco regime. The Hispanist has been told “hundreds” of people how they managed to get hold of a copy, and how they kept it hidden.