Pamela Salgado was 25 years old when her ex-partner, now in preventive detention without bail, ended her life in Cambrils a month ago. On him, 53 years old, weighed a restraining order for ill-treatment. For Warda Ouchama it was not the first time either. He had already denounced his partner twice in the hope that he would not be assaulted again. But nothing could stop him. The young woman was pregnant when he murdered her in May along with her seven-year-old son in Sa Pobla (Mallorca). These are just two extreme examples of how recidivism in sexist abuse can end the lives of women, a situation in which the aggressors return to exert violence against them despite having denounced them. Helping to tackle this problem is the goal of a group of researchers that has designed, in collaboration with the Ministry of the Interior, an advanced analytics and artificial intelligence system that analyzes, compares and interprets complaints of gender violence to predict repeat attacks and strengthen the protection of the victim.

The risk that an abuser will again attack a victim who has already reported the events to the police forces in Spain is 15%, according to the Ministry of the Interior. José Luis González, member of the Secretary of State for Security, co-author of the project and former lieutenant colonel of the Civil Guard, affirms that this is a “very low” percentage. However, conforming is not an option in terms of sexist abuse, according to the expert. Reoffending poses a risk in the day-to-day life of many women and ranges from the moment an aggressor breaks a restraining order by calling the victim until he can kill her. “We have to further refine prevention to reduce this problem to the maximum,” says González. This new system works as a complementary tool to the Comprehensive Monitoring System for Cases of Gender Violence (VioGén) And, although the research is still in peer review, the results point to an improvement of the prediction of between 10 and 15%. In other words, of the more than 600,000 cases that VioGén has registered since its launch in 2007, between 60,000 and 90,000 women could have a diagnosis more adjusted to their protection needs against recidivism.

The key to the system is in the use of machine learning or machine learning, according to José Ángel González-Prieto, PhD assistant professor at the Faculty of Mathematical Sciences of the Complutense University of Madrid (UCM) and one of the researchers of the project. “This implies that systems can learn from data, identify patterns and make decisions automatically”, clarifies the mathematician. When a woman denounces that she suffers sexist violence, she responds at the police station to a pre-set questionnaire of more than 50 questions from the VioGén system about her situation, the psychological profile of the aggressor or the socioeconomic conditions of those involved, among other points. Each of these indicators has a weighting within the final result, based on which a level of risk and a type of protection are assigned for the victim.

“After analyzing databases, the new system extracts the behavior patterns of the different types of aggressions from the questions in the questionnaire and detects whether the case is identified with an archetype of recidivism”, points out González-Prieto. The results are not definitive yet, but an example of an extreme risk case whose detection reinforces this program would be one in which the aggressor has a criminal record and owns weapons or the woman maintains an economic dependence on her partner and both have children in common. . 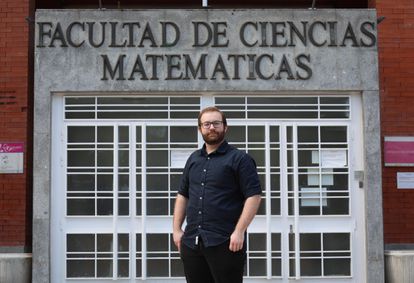 José Ángel González-Prieto, research mathematician of the project, at the Faculty of Mathematical Sciences of the Complutense University of Madrid, BBVA Foundation

An advantage that this project brings is the ability to work with the entire database. “VioGén is still a local analysis that only looks at the specific case that is reported. Our system analyzes the whole history ”, clarifies the mathematician. This can lead to more efficient resource management by prioritizing cases that match a repeat offender profile in which the security forces must act. In addition, the VioGén questionnaire has been renewed over time and the new system allows automating processes. “We elaborate the weighting or the value that we give to each one of VioGén’s questions and we meet every two or three years to validate the tool. This system could do it on its own, ”says González.

The project was born two years ago as a commission from the Ministry of the Interior within the framework of the collaboration it maintains with different universities. For its preparation, the researchers have worked with a sample of 45,000 cases reported between 2017 and 2018. However, it is prepared to draw on the entire VioGén database. The researchers say that it is an innovative tool in the European Union. “VioGén is already a pioneer in the fight against gender violence, there is a social conception that this is a serious problem that has to be tackled and we always try to be at the forefront,” says González-Prieto, who received two months ago the Vicent Caselles Mathematical Research Award from the Royal Spanish Mathematical Society and the BBVA Foundation.

Despite the good prospects, the system still has some limitations. The program can only be applied when a woman reports the abuse to the State security forces and is not prepared to join the social services assistance system, for example. Official statistics suggest that 80% of victims of sexist violence who were murdered never reported their aggressor. However, González-Prieto assures that this program can contribute “notably” to predicting recidivism. “Every effort to prevent is important and this system is a technological evolution of the current protocol, which will provide additional protection for women,” says the researcher.

Success requires continuous improvement of the program, according to González-Prieto. The mathematician defends that machine learning and the processing of large amounts of data is the way to go. But he emphasizes that its usefulness must transcend any social sphere and not be restricted to leisure or entertainment issues: “The effect of artificial intelligence is crucial and the sooner it is included in as many aspects as possible, the more we will progress as a society.”

A similar operation to Netflix

The mechanism behind this new project is not innovative, although its application to the field of prevention of gender violence is. For the research, the mathematician José Ángel González-Prieto has taken as a starting point the operation of the so-called “recommendation systems” of movie and series platforms such as Netflix in which he works. “As soon as you connect, the service shows you movies that you may like based on your consumption patterns and that of other users. Saving distances, these same profile extraction techniques are the ones that we have tried to transfer to our research with VioGén ”, the researcher clarifies. The objective is to understand what factors characterize a repeat aggressor, according to José Luis González, a member of the Secretary of State for Security. “We want to learn from the data as many companies do, which have the consumers profiled. We seek to have patterns of criminals and victims ”, says the expert. González-Prieto points out that the possibilities provided by these techniques are wide: “It is useful for aspects as banal as connecting to film platforms, but it can be applied to much deeper things. For example, systems that determine what type of medical treatment I should follow or which specialist I should go to ”.

With the relaxation of summer, cyber dangers are accentuated: this is how you can protect yourself during the holidays

The human minds behind the artificial minds