López Obrador or the domestication of rancor 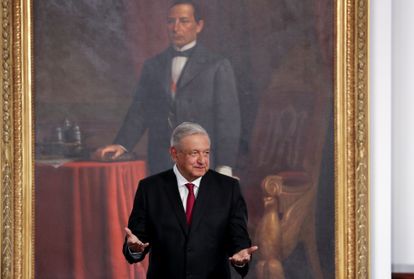 The president of Mexico, Andrés Manuel López Obrador, at the presentation of the third government report.EDGARD GARRIDO / Reuters

On some occasion, President Andrés Manuel López Obrador affirmed that he would stay in power for two six-year terms and managed to stop the breathing of many for an instant, only to add that he would actually do in one six-year term what others do in two, thanks to the intensity with which it works. When listening to the third government report, just halfway there, it would seem from the content and the tone that, in effect, it took stock of a full six-year term. He himself affirmed that the magnitude of the change that his government has achieved in three years would even allow him to retire today with the awareness of having accomplished his job. And the president is right about something, the gale in the workplace has kept us for better or for worse on the edge of our chair; others would say that with the Jesus in the mouth. It is not clear if this is a Fourth Transformation, but it is clear that, in more ways than one, the first three years of his government have shaken the country.

Of course, not everyone agrees with the nature of these changes or the way to carry them out. The president has turned verbal confrontation and harassment of his real or supposed adversaries into the fuel that fuels his anxieties and anxieties. But we would be wrong to confuse a method with the background. Beyond what appear to be occurrences, stubbornness and obsessions, and to a large extent they are, López Obrador has been extraordinarily consistent and systematic with one objective: to change the leadership of the Government for the benefit of the popular sectors, without putting at risk the political and economic stability of the country.

It is precisely what he wanted to communicate in his third government report. His list of macroeconomic achievements could have been signed by the director of the IMF: openness to integration with the United States, balance in public finances, aversion to indebtedness, control of inflation, improvement in tax collection without tax increases, strengthening of the currency without flawed central bank intervention. In his report, the president boasted historical records regarding the stability of the peso, international reserves, control of public debt, foreign investment and other indicators. Certainly many of them respond to a multiplicity of factors and not necessarily or exclusively to public management. But it is clear that they have as a backdrop a responsible action of who used to be accused of posing a threat to Mexico.

The president’s riotousness, the elbows with which he tries to make his way in front of other political actors, the picturesque brush strokes and his stubbornness tend to despair over and over again throughout the week. But we should ask ourselves how much of this responds to a strategy, conscious or intuitive, to ingratiate himself and maintain his link with the submerged Mexico that brought him to power and, to that extent, prevent despair from turning into instability. As long as those who have many reasons to disagree continue to assume that the president of Mexico speaks and governs for them, the less likely a social outbreak is.

But this government report, unlike his morning conference, was not addressed to the rostrum but to the elites. There were no attacks or unnecessary provocations that fuel their press conferences. The message was intended to tell the other powers that his government has been even more responsible for stability and growth than that of previous administrations.

Like any other government report, the one made by López Obrador constitutes a selection of the positives of his administration. This is not an unbiased or realistic view, although that does not mean it is false. But that does not mean that, as is often the case with a management report, it is an act of propaganda. There will be statistics to confirm what was stated by the president and statistics to contradict him.

Certainly we would have wanted the president to have made some recognition of what could have been done better and was not done, or flat out what has gone wrong. To the violence of organized crime, to the shortage of medicines due to hasty actions, to the failure of Insabi to grant universal free health, to the worrying militarization of the public administration or to the half a million victims that the covid would have left in estimated figures. That, of course, was not addressed.

But there is something in which he is not wrong. Perhaps the greatest legacy that his Government is going to leave resides in the new uses and customs of public life. Laws and reforms can be reversed, of course, but it is true that there are aspects of the political culture that will remain installed when he leaves. Or as he put it in his report on Wednesday: “How could conservatives take away pensions from older adults; how scholarships for poor students could be abolished; how to return to luxury, to extravagances in the exercise of government; how to return to tax forgiveness for large economic or financial corporations; how to return to the predatory privatization of public goods ”.

In this sense, obradorismo is a political expression of the social deficits and political excesses that we have built in recent decades. Many may not like it in the details, but it should be understood that there is an unavoidable component of resentment; a resentment that brought him to power and on which the president rides doing what is necessary to keep him from running wild.

López Obrador spoke of the historical impact that his transformations will have. And in part he is not wrong. Obradorismo is here to stay for a while, and the implications will have to be assumed. If the PAN lasted two six-year terms in the Palace, the turn of the helm that leads this political current could stay more than one, without a doubt. Polls clearly show that Morena is unrivaled for the next presidential election. What the opposition would have to understand is that beyond a pendular rearrangement, it is a reality sustained by the discontent of the majority due to the prevailing poverty and inequality. As long as these remain in force and the labor movement is its political expression, it will remain in power. Some will see it as the worst of nightmares, others as hope for a better life and some more as a parapet against more dramatic scenarios, such as chaos or repression.