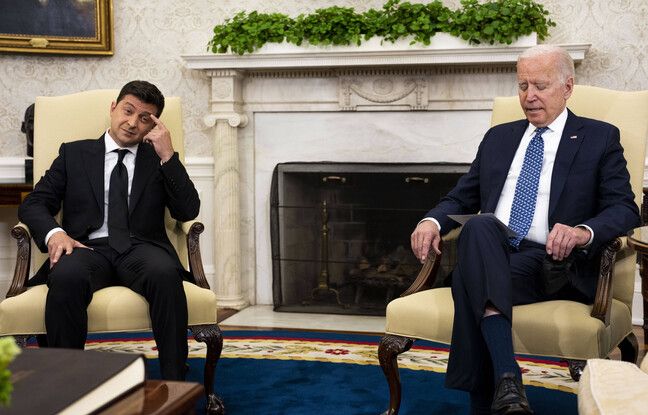 He finally got his visit to the White House. Ukrainian President Volodymyr Zelensky, from whom Donald Trump had asked “a favor” (trying to find compromising information on Joe Biden, which had earned him a first impeachment in January 2020), was received by the American president on Tuesday. Who promised to support him against Russia, while remaining evasive on the very delicate question of NATO, which Ukraine would like to join.

“The United States remains determined to support the sovereignty and territorial integrity of Ukraine in the face of Russian aggression,” said the American president in the Oval Office, receiving his Ukrainian counterpart. The meeting, initially scheduled for Monday, was postponed twice, against the backdrop of a painful conclusion for the United States of the war in Afghanistan.

The departure of the last American soldiers gave another dimension to Mr. Zelensky’s visit. Both China and Russia have been quick to interpret this haphazard withdrawal as a warning to countries that have staked everything on US military support, such as Ukraine. The Ukrainian president felt that the two countries had “a very large number” of subjects to discuss: security of course, in the face of the Crimean separatists, supported by Moscow. But also the energy issue. Kiev did not appreciate the US president’s lifting of sanctions against the Nord Stream 2 gas pipeline project.

This submarine pipe which is about to be completed and passes under the Baltic Sea, will directly connect Russia and Germany. This would deprive Ukraine of at least $ 1.5 billion per year that it currently receives for the transit of Russian gas through its territory, and of a diplomatic pressure tool.

Joe Biden, who believes that this project has gone too far to be stopped, then obtained from Germany a commitment to support the energy security of Ukraine, which did not completely reassure Zelensky. Failing to lead to shattering announcements, the visit is already a prestigious victory for the Ukrainian president, who is only the second European leader to be received at the White House, after Angela Merkel.

Beyond this token of favor, the Ukrainian head of state and his country “have received as much attention from this administration, and perhaps even more attention, than any other European country”, argued one senior White House official. And the Ukrainian head of state leaves with at least the promise of $ 60 million in additional military aid, in the form in particular of Javelin anti-tank missile devices. The senior White House official pointed out that since 2014, the United States has allocated $ 2.5 billion in aid to the Ukrainian armed forces, including more than $ 400 million in 2021 alone.

Nothing concrete about NATO

But on the very delicate subject of Ukraine’s accession to NATO, Zelensky was at his expense. “I would like to speak with President Biden about his opinion (…) on Ukraine’s chances of joining NATO and on the timetable,” he said. Membership in NATO, a prospect which is hardly unanimous in Europe, would mean that members of the military alliance would be required to intervene in the event of aggression against the country.

On Wednesday, Joe Biden only repeated to the press his “support for Atlanticist and European aspirations” of Ukraine, without coming forward. His spokesperson Jen Psaki said during a press briefing that the United States certainly wanted “the door of NATO to remain open to the candidate countries, when the latter are ready and able to fulfill the conditions” laid down. .

“Ukraine must take steps” in this direction and “knows very well which ones: to make efforts at legal reforms, to modernize its defense sector and to boost its economic growth”. Joe Biden has already publicly called on the Ukrainian president to tackle corruption.

History of a French crime

The Islamic State claims the launch of six rockets in Kabul

The Islamic State claims the launch of six rockets in Kabul