“If we had been able to arrest living terrorists, we would have done so”

The second episode of our series on the scenes of the assaults of November 13 ended with the neutralization of the terrorists and the release of the hostages at the Bataclan.

Night was short. Very short. After the assault on Bataclan on the evening of November 13, neither Christophe Molmy, who then headed the repression and intervention brigade (BRI), nor Eric Heip, at the time number 2 of the Raid, managed to close the ‘eye. And the next day at dawn, these elite units are mobilized to secure searches and arrests. A new race against the clock is underway to find the fleeing terrorists before they commit another attack. While the trial of the November 13 attacks opens on Wednesday before the specially composed Assize Court, the two police officers confided in these moments, the most trying of their rich career.

On November 16, thanks to information, Abdelhamid Abaaoud and Chakib Akrouh, the last two living members of the commando des terraces, were located in Saint-Denis, in a squat belonging to a certain Jawad Bendaoud. With them is Hasna Aït Boulhacen, Abaaoud’s cousin, who played the middleman. The Raid was warned the next evening, shortly before midnight, the BRI called in for reinforcement. The assault is scheduled in the middle of the night to try to surprise the terrorists in their sleep. CCTV suggests, in fact, that they are heavily armed and equipped with explosive belts. As for their determination, it no longer needs to be proven. “The circumstances of the 13th attacks inevitably influence the intervention, since we know that they will go to the death,” underlines Eric Heip. If we could have called them alive, we would have done it, but we suspected that it would be mission impossible. “

“The building could collapse in the event of an explosion”

On November 18 at 4:16 am, the assault was given. A first column of police sneaks into this squat where families and single men live, most of them undocumented. No one has a lease. Impossible, in such a short time, to identify all the residents to ensure that no accomplices are hiding in another apartment. The authorities therefore take the decision not to evacuate the building. “The complexity of the operation lies above all in the environment. The building was very dilapidated and could collapse in the event of an explosion, we had not been able to locate the place ”, explains the former number 2 of the Raid. 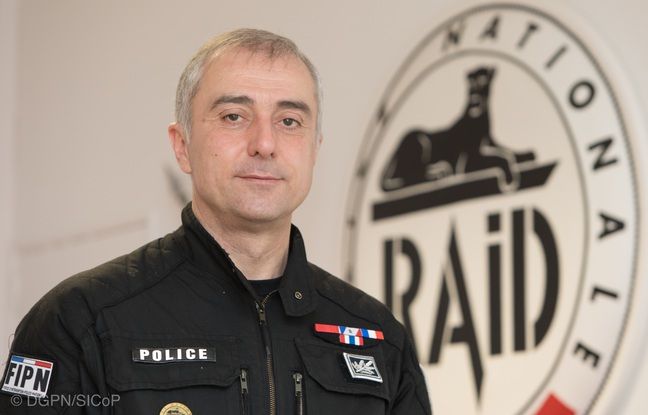 Eric Heip was Raid No. 2 during the November 13 attacks. – Personal collection

According to investigators, the terrorists are hiding on the left 3rd floor. “But when we arrive, there were three doors on the left,” recalls the elite policeman. After a few moments of hesitation, they identify the one in the back and try to blow it up with explosives. She resists. Missed for the effect of surprise. Hidden in a corner, the terrorists immediately open fire. From the first minutes of the intervention, five police officers were slightly injured by shrapnel. The windows, caulked, make it impossible for snipers to work. Then begins an endless shootout. The scientific police will find on the spot 1,500 cartridges and 4 percussion grenades emanating from the elite unit… against only 11 bullets attributed to the terrorists who have, in reality, only an automatic pistol.

“We did not expect these criticisms”

But the men of the Raid will never have the terrorists in their sights. Impossible, therefore, to know what is their arsenal or if they are affected. The police are trying to send robots equipped with cameras, but they fail to make their way through the rubble. Failing that, an assault dog, Diesel, goes on reconnaissance. Killed instantly. “We could not approach or let the terrorists approach because we knew that they had explosives and that they would try to blow themselves up as close as possible to us. Our objective was therefore to saturate the space, ”explains Eric Heip, while acknowledging having had the feeling of wiping“ more ”retaliatory fire than those exhumed during the investigations.

At around 5 a.m., a loud bang sounded: the explosives vest worn by Chakib Akrouh had just been triggered. Did the terrorist activate it or did a grenade detonate it? Impossible to say. The blast of the explosion also kills Abdelhamid Abaaoud. Hasna Aït Boulhacen, she died of asphyxiation. But the shooting continued for two more hours, the time for the authorities to have a “consolidated” balance sheet. The apartment is nothing more than a pile of rubble, the already weakened ground has subsided on the apartment below.

If the mission is successful, the operation is however quickly criticized: too long, traumatic for the inhabitants, unsuitable for the sector… “It was very hard, we did not expect these criticisms when we had just neutralized the main terrorists of the world, in difficult conditions, without there being any serious victims * ”, continues Eric Heip.

Despite the controversy, turning the page on this assault was much easier than that of the Bataclan. At the BRI, if Christophe Molmy did not observe any “traumatized” among these teams, he noted an increased awareness of the reality of the terrorist risk. “One day, I was asked if I was a victim of these attacks, remembers the former head of the BRI. Spontaneously, I said no, but it was a mistake: all of the people who were confronted with these scenes are marked, even if, of course, there are different layers in the status of victim. “

* Three residents were nevertheless wounded by gunshot, without their lives being in danger.