“All gestures are supervised”: in sport, a well-codified touch 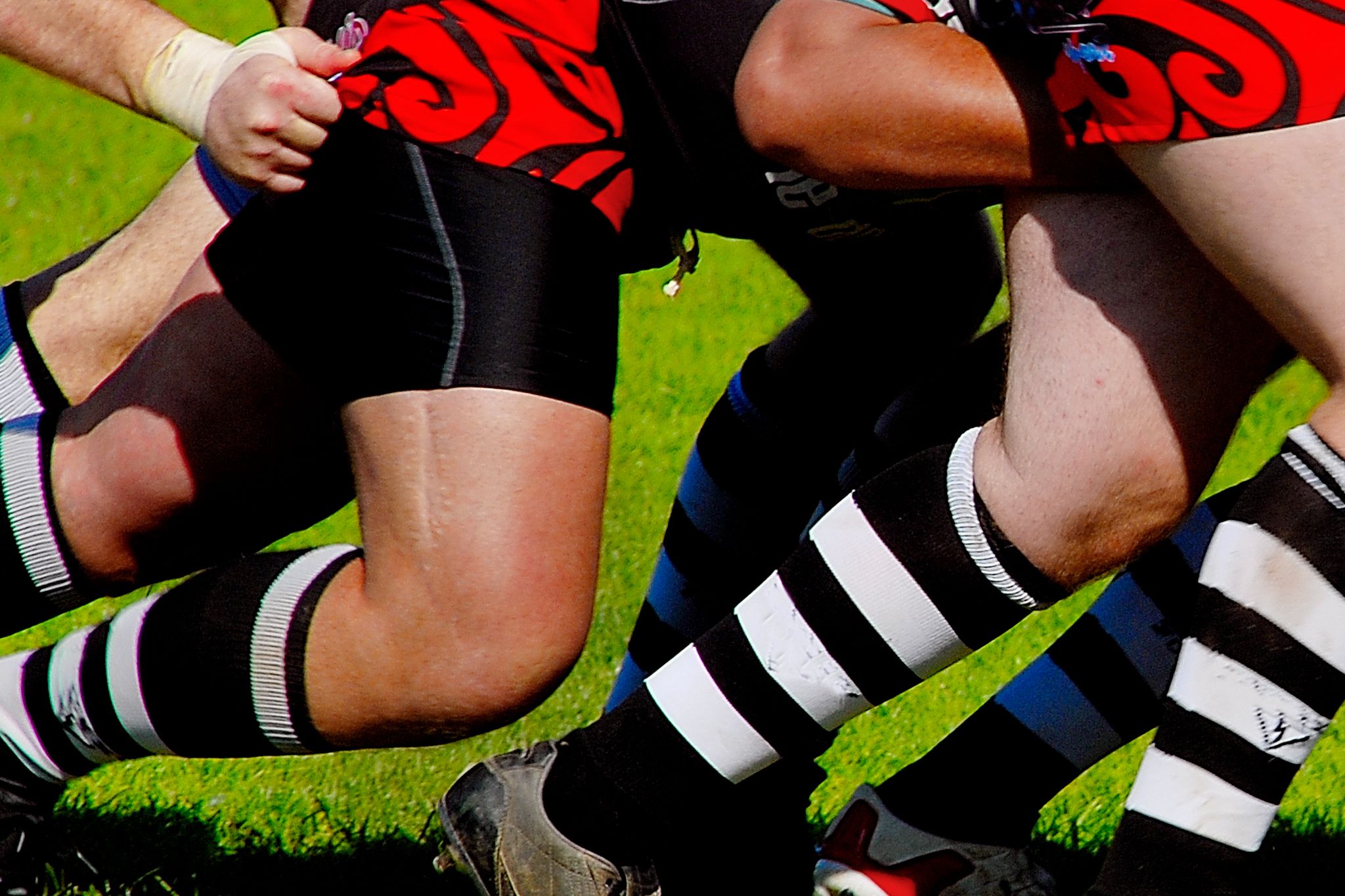 It’s intense physical contact, sometimes harsh and rough skin-to-skin contact. Touch in “contact” sports is synonymous with pushing, pressing, pulling, blows, pinching, more or less intentional and controlled under the effect of adrenaline. It is a confrontation which engages the whole body and puts it at the mercy of the opponent’s gesture, even if violent touching is most often prohibited. “ There is a fundamental difference between violence and tactical touch, necessary for action, even if behind there is always the idea of ​​the simulation of death, explains the philosopher Bernard Andrieu. AsNorbert Elias said, sport was invented to prevent the murder of others. »

“We tolerate violence less and less”

Therefore, it was necessary to supervise the practice, with rules, codified gestures, referees to contain aggression and protect people. “The whole history of sport goes in this direction, even in combat activities, including MMA (Mixed Martial Arts) where almost all blows have long been allowed”, notes historian Thierry Terret. ” Today, he adds, we tolerate violence less and less, and the confrontation becomes more softened, even euphemistic. “

→ Find episode 1 of this series: “We are beings of skin”: touch, our essential link to the world

Not only do players protect themselves more than before (boxing gloves, mouth guards, shin guards…), but the regulations are stricter. In rugby, the rules have often changed since the days of stress or “hacking”. It is now forbidden to tackle above the shoulders to protect the neck and face. The ban also applies to the genitals, in order to preserve the physical but also the moral integrity of the players.

Because in sport as elsewhere, touch is an ambivalent sense. There is something intimate, underlines psychoanalyst Josy-Jeanne Ghédighian-Courier. He’s always scared “To societies, religions and cultures” (1), which earned him “To be carefully coded, framed and ritualized”. Touch, she continues, “It is to cross a distance”. A crossing that “Will trigger warning signals, because the object will no longer be intact. It will carry the material or symbolic trace on which are based goods of the prohibitions ”.

“We touch the opponent to block him, the teammate to help him”

This often dreaded proximity is omnipresent in contact sports. In tackles, scrum or maul in rugby, but also in the clinch of judo or wrestling. Sports practice is also the only social situation where we have the right to touch the other without direct consent, remarks Bernard Andrieu. “But all gestures are supervised, he specifies. The codification of touch in sport is an enterprise of moralization. “

The regulations frees the mind, recognizes Pascal Valentini, former amateur rugby player turned physical trainer: “In a match, we touch the opponent to block him, or the teammate to help him, because that’s the rule of the game. And, from the moment we know why we are doing it, there is no has more inhibition. ” Séverine Vandenhende, world champion and Olympic judo champion, now coach of the French women’s team, has never felt any discomfort in her practice either. “I’m so focused on what I’m doing that these questions don’t even come to my mind. “ However, she notes that certain postures on the ground, very suggestive, can make adolescents uncomfortable. Some young girls also stop judo when they no longer have female partners.

Wrestling champion, Audrey Prieto has learned to ignore this promiscuity, however very strong in her discipline, where the bodies, dressed in a thin lycra jumpsuit, become entangled on the mat. “I started wrestling very young with my father and, when you practice very young, you get used to it quickly, especially since this sport is very instinctive”, she says. Adolescents may nonetheless experience a “Apprehension” when it comes to facing an opponent of the opposite sex.

In wrestling, “the most effective gesture is to catch the legs”

If the codification of touch makes it possible to preserve the physical and moral integrity of athletes, it is also at the service of performance and victory. The techniques differ from one discipline to another, but the gestures are always developed to obtain maximum efficiency. So, “In rugby, if we place the shoulder against the buttocks of the teammate to push in scrum, it is because the transmission of forces is more efficient, Pascal Valentini analysis. With the hand, there is a loss because the elbow bends, while with the shoulder, the forces are transmitted directly from the ground via the legs, the abdominals and all the sheathing. It’s a story of biomechanics. “

In judo, a direct gripping sport, the opponent is grabbed by the kimono to throw him to the ground. The best way to do this is to perform an ippon. “It is the perfect, precise and fast gesture which requires a minimum of force”, Séverine Vandenhende details. In the fight, resulting from the Greek pancrace in much less violent, it is a question of immobilizing the adversary on the ground or to leave it out of the circle. “And the most effective gesture is to grab his legs”, explains Audrey Prieto.

A ritualized touch in the practice of sport, not outside

The codification of touch also makes it possible to teach gestures, through kinesthetic guidance. “Feeling the right gesture and the right technique by touching the other is much more effective than explanations”, observes Thierry Terret. However, the exercise can prove to be perilous. If Pascal Valentini felt no inhibition as a rugby player, the same is not true in his role as physical trainer. “When you have to stretch, place, replace, there is a guided contact that is more awkward, he admits. If I work with minors, I refrain from touching them in the absence of another adult. “

However, is the risk of drifts higher in contact sports? Scandals in fact spare no discipline. “A survey by the Ministry of Sports shows that, in more than half of the federations, educators have acted unfortunate, not to say criminal, mainly against young girls, young women, but also boys” , Bernard Andrieu reports. If touch is ritualized in the practice of sport, this is no longer the case in the locker room. ” In the game, continues the philosopher, the private body of the individual is inside a symbolic function which protects him, but, outside, this is no longer a guarantee against violation. “

Paradoxically, the question of touch is rarely mentioned in sport. The term itself is absent from the technical vocabulary… except in fencing, where the only contact is that of weapons. Some sports are even defined by the absence, the prohibition to touch. Basketball, volleyball, aikido. Even in football, “Physical contact between two players is penalized, emphasizes anthropologist David Le Breton. This is what I call the ritualized spacing of the body, just as there is a codification of clothing that can be adjusted, as in wrestling and wrestling, or loose, as in aikido, judo. or karate ”.

→ EPISODE 3. “Touch under half-mast”: the culture of non-touch goes global

This ritualization is moreover not foreign to the social origin of the disciplines. “Several studies have shown that the more a sport is forced to touch, the more popular it is, Thierry note scares me. Conversely, the more it organizes an absence of contact, the more it is practiced by a favored population. “

The touch remains very ritualized for all, except in the sporting celebration where, carried by the emotion of a victory, players and spectators free themselves from certain social codes. “It is a way of exorcising all the rituals of everyday life which impose distance on the other, analyzes the anthropologist. In the enthusiasm, there is a kind of overflow, we kiss, we embrace, as if the prohibitions were temporarily suspended. “

A word that touches: melee

Two bodies, at least. Then their reconciliation. Often associated with the field of wrestling, as in boxing, a situation where the opponents get closer, one can return to clinch in an unexpected place, and the opponent having to parry the blows. But the clinch is not exclusive: it is also invited, in the sport known as contact, where touch is the breeding ground for strength and winning … In rugby, players form athletic, sculptural figures and muscular by throwing herself into battle. All these bodies in melee and entangled seize the ball arm-to-body or braced, shoulder to shoulder. In skating and dancing, the clinch is more undulating, offering forms that are most often harmonious and nevertheless acrobatic. We brush, brush and touch, we hold and hold back, in scope, in arabesque – these multiple intertwining evokes ancient bas-reliefs. In the figurative sense, we can also face reality or its passions hand to body, head on, we can also throw ourselves, full body, into the melee of words, images, thoughts.

The top 10 most popular films now on Pathé Thuis – Paudal

The top 10 most popular films now on Pathé Thuis - Paudal

Lifelong threat for Cherif A. after Amsterdam pizzeria murder