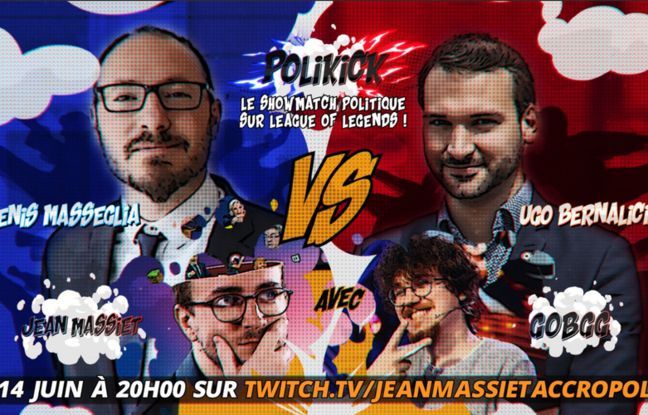 A little lightness in a very tense campaign … Already daily adversaries in the Chamber, the deputies Ugo Bernalicis (LFI) and Denis Masséglia (LREM) have decided to compete in another arena. The parliamentarian of rebellious France and that of the Republic on the march will challenge each other on Monday June 14 on “League of Legends”, an online video game where several players oppose each other on a battlefield.

The two deputies announced this improbable match on Twitter, with a lot of fixtures. “We do not solve that with slaps, but with a good old ‘League of Legends'”, tweeted Ugo Bernalicis in response to Denis Masséglia. “They challenge me, I answer with keyboard strokes and a mouse!” My team is getting ready for the show #PoliKick “, Had announced a few hours earlier the deputy LREM, going so far as to provoke his future adversary:” @Ugobernalicis, you are not ready for Monday… ”

They challenge me, I answer with keystrokes and a mouse!

My team is getting ready for the show #PoliKick : muscular workout #LeagueOfLegends from tonight 8 p.m. on my Twitch channel 👉 https://t.co/oZM0GRrf1S@Ugobernalicis, you are not ready for Monday … pic.twitter.com/AmIhQHiCXH

The fight will be broadcast this Monday at 8 p.m. on the Twitch channel of Jean Massiet, a streamer specializing in politics and video games, and will be hosted by YouTuber GobGG. Each deputy will have his own team, with several other players whose identity has not yet been revealed: that of Ugo Bernalicis will be called the “Carapateurs en commun”, in reference to a video game monster.

Ugo Bernalicis and Denis Masséglia are not novices, they are both members of the study group on video games at the National Assembly. They each have their own Twitch channel and know each other well since they have already played together for
Jean Massiet during the ZEvent, a charity event that brings together streamers to collect donations for associations.

With this unlikely challenge on Twitch, the two parliamentarians are trying to seduce the young electorate, one week before the regional and departmental elections …

Presidential 2022: Philippe Juvin candidate for the primary of the right

COVID-19: Moscow plagued by the Delta variant which thwarts the global lifting of restrictions