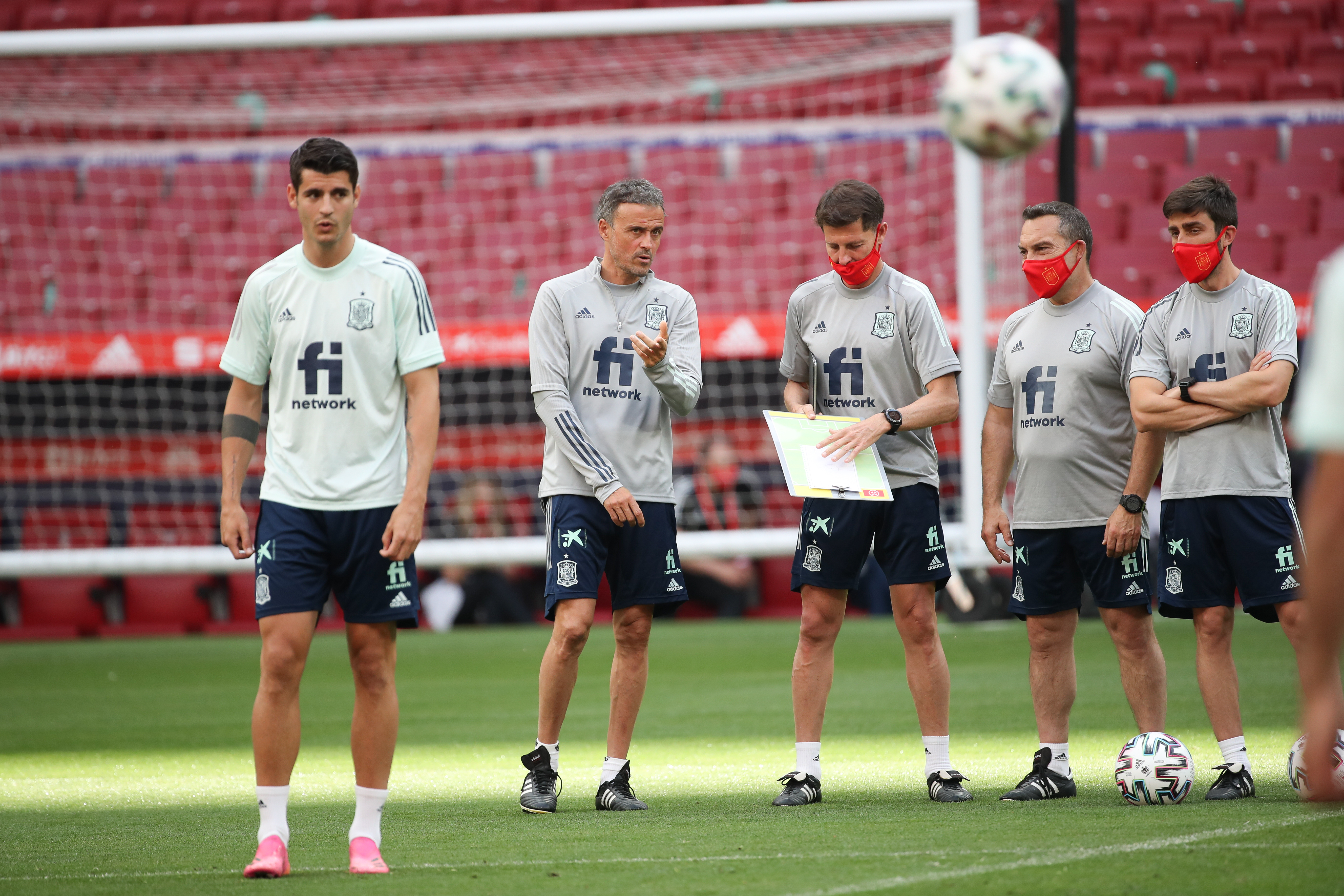 A figure, as if it were an old-fashioned central marker, always walks with Luis Enrique through the Ciudad del Fútbol of Las Rozas. Dressed in the official team clothing, the psychologist Joaquín Valdés is the silent shadow that swarms with his eyes permanently open next to the coach. In public, during training sessions or at the coach’s press conferences, Valdés always observes more than he talks. In games, he sits close to the bench and absorbs the responses of the players and Luis Enrique in the midst of a competitive whirlwind. His work is fed by detecting bodily expressions, actions or words that help him to decipher the mood of Luis Enrique’s troop, with whom he has been working since 2008. For the Asturian coach, Valdés is one of the four legs on which he stands holds your staff, along with physical trainer Rafael Pol, second coach Jesús Casas, and Aitor Unzue, analyst.

The internal tension that was installed since the positive of Sergio Busquets jumped on Sunday has redoubled the importance of Valdés as manager of the critical situation unleashed. “For that we have a psychologist. The head is the most important thing, and then to compete you need physique. But the head is the key to everything, and there we are strong ”, says Luis Enrique. The internationals have experienced stressful days similar to those that Atlético de Madrid experienced when, in August 2020, two days before traveling to Lisbon to play the eighth final of the Champions League, Ángel Correa and Sime Vrasljko tested positive. A third would have meant exclusion from the competition. With the second positive in the selection, that of Diego Llorente, before the tests revealed that it was false, the ghost of an outbreak flew over the environment at the headquarters of La Roja in the Ciudad del Fútbol de Las Rozas. A rojiblanco manager recalls the tension in Lisbon: “A situation like this is a psychological bomb. The player is very aware of whether he is going to be able to play or if he is going to be infected. The closed environment of the bubbles is terrible in such a case. We never said it because it was going to sound like an excuse because Leipzig eliminated us, but they talked about everything except the game, “he says.

Valdés, a former judoka, Asturian and cycling fan like Luis Enrique, is a defender of the performance theory, which encompasses physical, technical, tactical and psychological aspects. The same comprehensive line that characterizes the modus operandi of Luis Enrique and his collaborators.

”Our way of working is very team, because the idea of ​​our leader in that case is that most things are discussed, put in context and discussed among all, in such a way that each situation will require an intervention in function of giving the technical-tactical opinion, the assistant coach; physical, the physical trainer; and psychological, ”Valdés explained in 2019 in a talk organized by EL PAÍS and BBVA. During these days of stress and fear, the psychologist has been seen chatting with players while pedaling on the bikes of spinning taken outdoors to avoid the enclosed space of the gym. The coach has stressed to the internationals that the psychologist is there for what they need. His delicate task since the covid-19 penetrated the selection bubble has been to make the crisis positive in the heads of the players through individual and collective talks.

Valdés practices visualization techniques that he prefers to call imagination training and whose purpose is to increase the player’s competitive self-esteem. Hermetic by professional deontology, and because Luis Enrique also prefers it that way, he was the only one of the staff that was not opened to the press in the stage of Robert Moreno. His departure led to Jesús Casas, until then an analyst, becoming second coach. Born in Madrid, but from Cádiz by adoption, he also worked with Luis Enrique at Barcelona, ​​in addition to having been coordinator of the Cádiz youth academy and Xavi Gracia’s assistant at Watford. His space as an analyst was inherited by Aitor Unzue, son of the former goalkeeper of Osasuna, Seville and Barcelona.

For Luis Enrique, Rafa Pol is more than just a physical trainer. The coach considers him a very good potential soccer coach. They have already worked together in Roma and Barcelona. His sessions are praised by the players for how he integrates the real situations of the game and the precepts of Luis Enrique’s libretto in very dynamic exercises.

The internationals and the technical body were vaccinated this Friday morning as planned, all with a single dose, from Janssen, those who have not passed the covid-19, and from Pfizer those who have already suffered it, as long as they had elapsed eight weeks since they got over it. To this was added that, after testing positive last Tuesday and leaving the concentration, Diego Llorente chained his fourth consecutive negative in the confirmation tests that have been carried out since then. The Leeds center back, returned to the concentration, so when Busquets returns, which Luis Enrique has assured that he will include in the list, the members of the selection will be the 24 mentioned from the start. For the third consecutive day, there were no positives in the Red bubble. Due to the psychological wear and tear that the prolonged uncertainty of having to wait until late at night for the results has generated in footballers, the tests are carried out at eight in the morning and the laboratory offers the results in the early afternoon, at be possible before training.

Picasso and Rodin: two giants of art in a masterful double exhibition in Paris