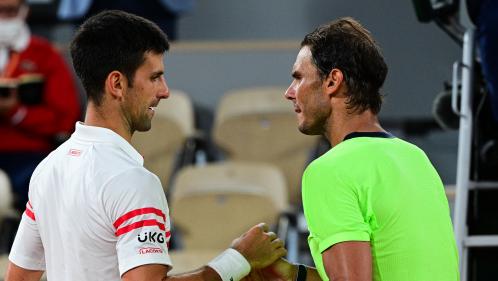 The legendary semi-final between Novak Djokovic and Rafael Nadal, Friday June 11 at Roland Garros, has reached new heights. So much so that, a rare thing, male and female players, former players or former players, unanimously praised the performance of the two men, their level of play. This praise is synthesized by this tweet from Nicolas Mahut: “What is the name of the sport that Nadal and Djokovic practice? I don’t know, but it looks so damn good“. Overview of the outstanding reactions on social networks.

What is the name of the sport that Nadal and Djokovic practice? I don’t know but it looks really good … #legends

In awe of what we just witnessed for the past 4 hours @DjokerNole @Rafael Nadal forever champs!!

“In awe of what we have just experienced during the last four hours. Djokovic, Nadal champions forever” – Maria Sharapova, five Grand Slam titles, including two at Roland Garros.

Do we tennis players play the same sport as the two of them?

“Do we play the same sport as the two of them?” – Diego Schwartzman, semi-finalist at Roland-Garros.

Thank you @Rafael Nadal & @DjokerNole for this exceptional sports evening

Tremendous game
Can’t believe what they played! Thanks @DjokerNole @Rafael Nadal.
I dream of meeting them again

“Huge game. I can’t believe the game they played. Thanks Novak and Rafael. I dream of seeing them again.” – Juan Martin del Potro, winner of the US Open, twice semi-finalist at Roland Garros.

Pleasure to watch this matchup. Unreal effort/execution from Novak. He was the better player on the day. What a match …

“A pleasure to watch this game. Unreal effort / execution by Novak. He was the best player of the day. What a game …” – Andy Roddick, winner of the US Open, three-time finalist at Wimbledon.

Most beautiful game of my life that I see “live”…. #rafadjokoacte58 @rolandgarros

What a game!! What a fight !!!
Thank you gentlemen !!!
@Rafael Nadal @DjokerNole !!@rolandgarros # rolandgarros2021 #rolandgaros

The greatest match ever played… https://t.co/yLN0RsmPiW

Arrest team arrests man after firearm is found in Southeast