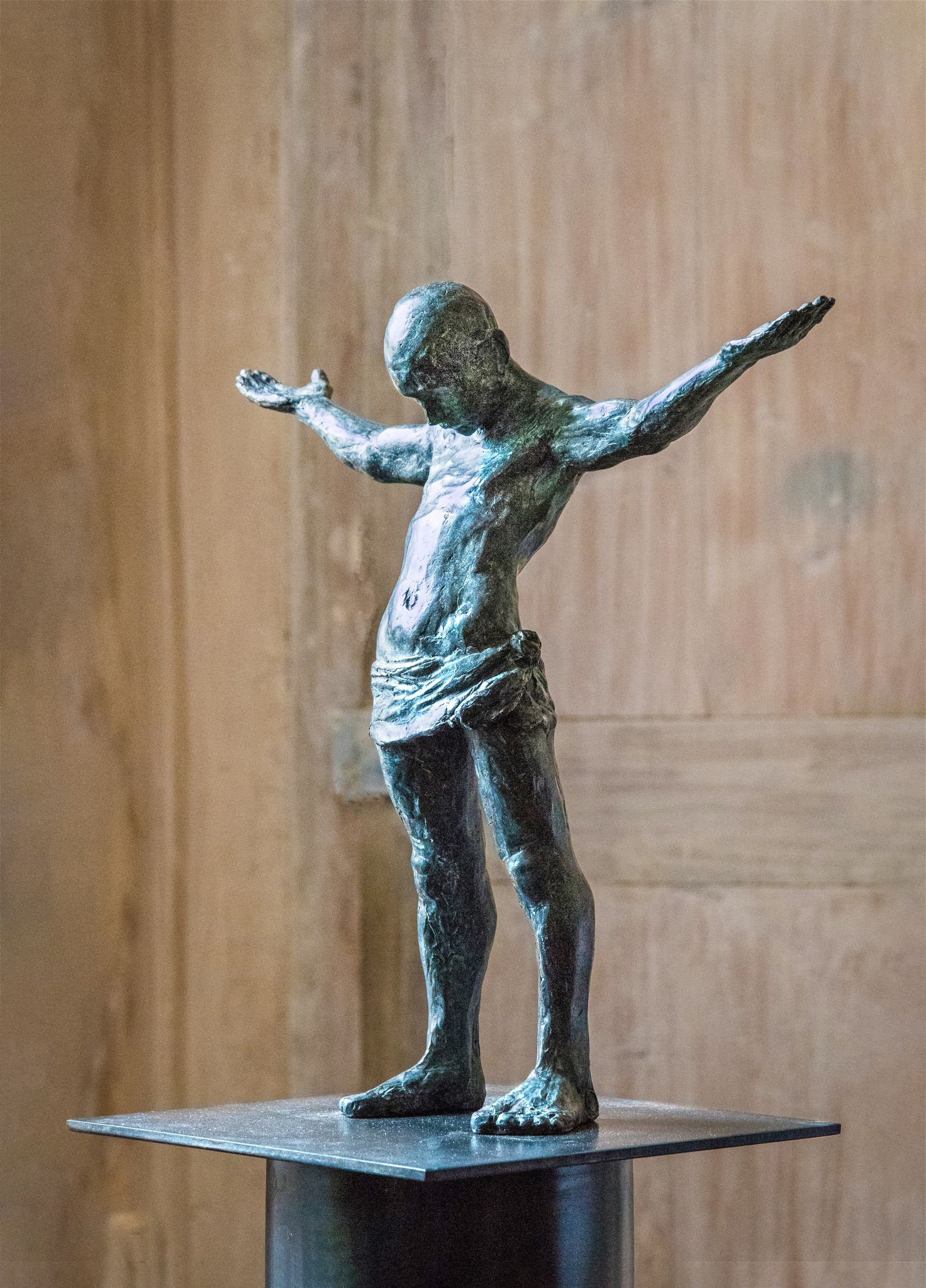 This contemporary sculpture embodies Saint Simeon, a Syrian hermit from the Ve century which, according to tradition, would have spent thirty-two years at the top of columns of ever increasing heights. The hermit’s attitude here is singular, almost paradoxical. The anchorite – literally “he who has withdrawn from the world” – welcomes and gives himself. From this double movement is effectively born a balance, certainly precarious, but what life could ever boast of not being so? Over time, changing columns regularly, Simeon approaches the sky. Standing with his arms raised, he longs for nothing but that. This is its goal. His fixed idea. The axis that gives meaning to his life. The energy circulates and, here, it is not an empty word. The saint is given everything he believes in. And what does he believe in? Perhaps he has faith in the virtue of dispossession, the very virtue of which in order to truly possess oneself, one must absolutely dispossess oneself. “Head bowed in submission, hands open to the sky, absolutely determined and abandoned at the same time, he holds a posture for life, for he expects neither glory nor consolation from it – only a breeze makes a section of the laundry quiver. dresses it… Committed, in a word, and alive, ”says Pierre de Saint-Maur, fascinated by the radical nature of such a vocation.

“She came all alone”, confides this young artist (born in 1990) under whose fingers she was born. “Mystery of asceticism! This sculpture seeks to approach him, to testify to the powerful anchoring of this man standing on his column, in a flexible balance shaped by the years lived under the law of his wish. Is Simeon speaking? No. Does he have disciples? No. Does austerity, loneliness, chastity weigh on him? Obviously no. He has even presumptuousness not to lack anything. His language is not about words. His body alone speaks for him. Planted there like a tree, the least of his gestures testify to the love of God and of his fruits. And while the prophets all around preach and stir, he doesn’t care. His charisma is elsewhere. He keeps silent. He prays. And more than fifteen centuries away, who knows if his prayer in the Syrian desert would not have something to tell us today.

An overwhelming Brazil and a Colombia without James: the keys to the 2021 Copa América

An overwhelming Brazil and a Colombia without James: the keys to the 2021 Copa América

Adopted teens: growing up without knowing your full story

European Commission is investigating acquisition of Kustomer by Facebook