Metz-Borny: a march in support of Sevgi, victim of an attempted feminicide 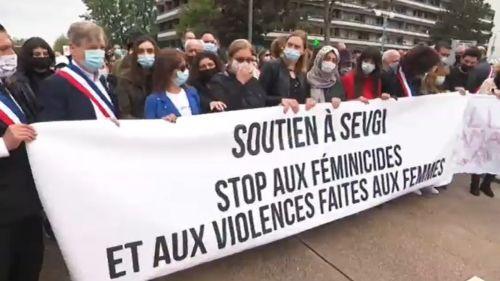 Many people this Saturday, June 5 in Metz Borny where a march was held in support of the woman victim of an attempted feminicide last Thursday in Metz Borny.

It was 10 a.m. this morning when many people gathered in front of the Metz-Borny district town hall to support Sevgi, the woman who was the victim of an attempted feminicide in Metz-Borny last Thursday. The crowd observed a minute of silence at the scene of the assault before heading to the Music Box (BAM). In the demonstration we could see banners with these words: “Support for Sevgi”, “Stop feminicides and violence against women” or “Never again”.

1 minute of silence at the scene of the attack 🙏 pic.twitter.com/mw6x90HUvx

This drama is part of a series of feminicides that have recently occurred in the Grand Est region, relaunching the debate on the monitoring of perpetrators of domestic violence. The suspect, 48 years old, tried to kill his companion on Thursday afternoon in the middle of the street, seriously injuring her, before shooting himself in the head after an “outburst of violence”, according to the prosecution. He is now brain dead.

He was sentenced in 2014 to two months suspended prison sentence for “violence by spouse”. And last August, his victim had filed a complaint for insults, a complaint dismissed by the prosecution. Until recently, on May 19 and 28, she again reported to the police to report that he had cursed her, spat on her and followed her in the car, according to the prosecution.

Continue reading on these topics

Leclerc takes pole in chaotic qualifying, ahead of Hamilton and Verstappen

Holiday continues to travel in the fog

Jim Bauer, Mentissa, Cyprien and Marghe for the finale of “The Voice”

” At valiant heart nothing impossible “