SpaceX did it, Starship makes a successful landing for the first time 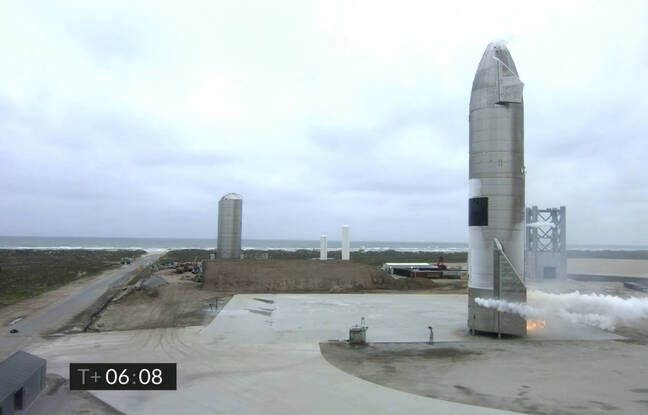 The fifth time was the right one. A prototype of the giant Starship rocket developed by SpaceX, whose four previous test flights had resulted in impressive explosions, landed successfully on Wednesday, company boss Elon Musk confirmed. “Nominal Starship landing!” He tweeted, meaning in space vocabulary that the maneuver actually went smoothly.

And the 5th time was good for Starship, with the first successful landing for SN15 (which didn’t explode after the fact like its predecessor) #spacex #Starship #StarshipSN15 pic.twitter.com/Wl2aMLLKX2

Flames erupted from the rocket base shortly after landing, according to the company’s video broadcast, but appeared to have been extinguished by water cannons minutes later. Such a fire “is not unusual” given the mass of fuel used by this enormous 50-meter-high craft, SpaceX commentator John Insprucker said on the live video.

This prototype, named SN15 for “Serial Number 15”, took off vertically using its three engines from Boca Chica, Texas, and the vehicle then flipped over to a horizontal position in the air. SpaceX did not say if it had managed to reach the 10 kilometers altitude, its goal, as in previous tests. The rocket then descended to land on a runway very close to the take-off site, before returning to vertical.

In early March, another prototype, SN10, had also managed to land, but it finally exploded a few minutes after touching down.

Previously, SN8 and SN9 had launched in December and early February respectively, but crashed into large fireballs as they returned to the ground.

Finally, at the end of March, SN11 took off in thick fog, but the test also ended in an explosion.

These tests are taking place in a near-deserted area near the border with Mexico and on the edge of the Gulf of Mexico – a place empty enough that an accident or explosion does not cause damage or cause casualties.

Starship is set to become SpaceX’s rocket of choice to one day go to Mars. The future rocket will consist, in addition to the manned spaceship, of a first stage called Super Heavy. The whole will measure 120 meters in height and will be able to carry 100 tons on board.

In the meantime, it is Starship – modified by then – that NASA has chosen to bring the next American astronauts to the Moon as part of the American Artemis program.

The astronauts will be launched from Earth by another rocket, SLS, developed by NASA, which will dock at a lunar orbital station called the Gateway. This is where Starship will have to wait for them there, ready to receive the astronauts for the last leg of the journey to the surface of the Moon.

But last week, competitor Blue Origin, which also responded to the US Space Agency’s call for tenders, filed a complaint protesting NASA’s decision to choose SpaceX.

Heirs are demanding masterpiece Kandinsky back from Stedelijk Museum

Violence in Colombia denounced in our streets

Violence in Colombia denounced in our streets

Residents of northern neighborhoods mobilize to buy a McDonald’s

LIVE | Homeless people vaccinated against corona from this week