Trial of Nordahl Lelandais: the accused says he is “sorry” and sticks to his version of the facts on the second day of the trial 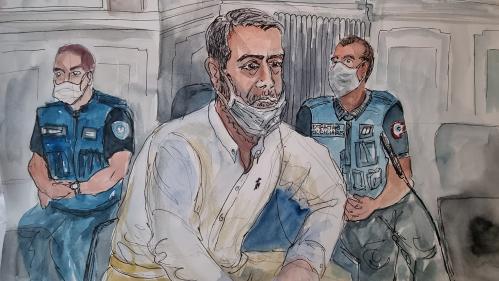 “Sorry Arthur”. Ln the second day of his trial in Chambéry (Savoie) for the murder of Corporal Arthur Noyer, Nordahl Lelandais gave his version of the facts. The accused addressed himself directly, holding back tears, to the portrait at the feet of the corporal’s relatives, whom he again admitted having beaten to death.

The former dog handler traced the thread of that night from April 11 to 12, 2017, without varying from the version given to investigators during the investigation and the reconstruction: a fight for a futile motive that would have gone wrong in a parking lot in the suburb of Chambéry.

“Sorry Arthur, I know you’re facing me today, declared Nordahl Lelandais, while evoking the body of Corporal Noyer lying on the ground. “I say what happened. Sorry for your family who must be very sorry for what they hear, but I am telling you the truth.“

At this time, Nordahl #Lelandais looks at Arthur Noyer’s portrait and says, his voice choked, “Sorry Arthur, I know you’re facing me now but I’m telling you what happened, I’m telling you the truth.”

He had told the soldier about that fatal night a few minutes earlier, explaining that he had seen a man, Arthur Noyer, in “a roundabout”, as he was on his way home. The accused then recounts having let him take a seat in his gray car and drove to Saint-Baldoph, near Chambéry, at his request and then to have stopped in a parking lot. “I felt a certain nervousness” of the corporal, he said.

Follows, tells Nordahl Lelandais, an altercation. “He punches me”, he explains.“From there starts a fight, I reply with punches, I fight. ”

“At the moment, I don’t realize, but I see that he has fallen. I walk towards him to try to wake him up. I feel that there is no more movement on his part.”, he says, claiming to have improvised a cardiac massage. The rest corresponds to its version given during the instruction. He explains having hesitated, then decided to put the body in the trunk, before taking the road to the Bauges massif where he will deposit the corpse.

#Lelandais finished. Much less verbose than yesterday, it gave exactly the same version as the last delivered during the instruction and the reconstitution. The hearing is suspended for a few minutes.

While the accused camped on his version, the civil parties, little sensitive to his apologies, showed themselves to be exasperated. “It’s cinema for us, reacted to the press Bernard Boulloud, lawyer for the Noyer family. Unfortunately he will hurt the family […] until the end.” Nordahl Lelandais will be questioned on the night of the facts Thursday. The verdict expected around May 12.

Commemorated victims on almost empty Dam, two minutes of silence throughout the Netherlands

The numbers are falling, so why are there no easing?

Latest news on the coronavirus and vaccines, live | The EU proposes to ease restrictions for travelers arriving vaccinated