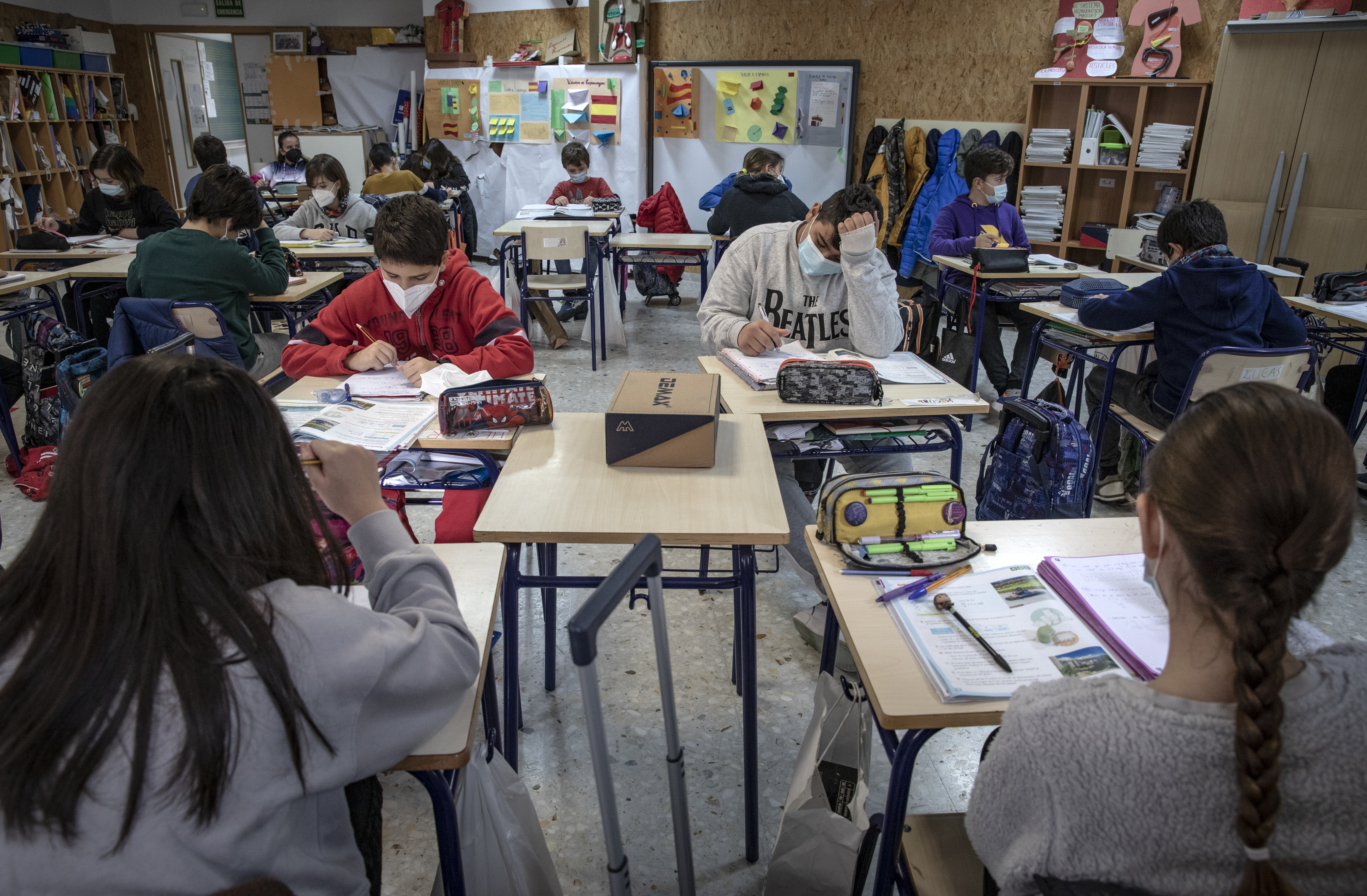 Math teachers are on the alert. They fear that as this course has happened in communities such as Valencia, their subject will merge with others in the first year of ESO and its content “will be diluted.” They are concerned that the current of work by areas, or mix of subjects, which are already followed by leading countries in education such as Portugal, will lead to a “simplification of Mathematics” that leaves the most abstract part off the agenda, that which can only be taught to through a purely mathematical reasoning that cannot be correlated with other subjects. In full transformation of the pedagogical model in Spain, mathematicians ask to be allowed to reinvent themselves, without having to go hand in hand with other subjects.

While the Ministry of Education is working hard with different committees of experts to redesign the contents of all the subjects to make them “less encyclopedic” – as the minister has repeatedly assured Isabel Celaá– and more practices to launch a new curriculum in the 2022-2023 academic year, some autonomies have anticipated innovation. The Valencian Community has been the first region to implement compulsory teaching for all first-year ESO groups, which involves mixing different subjects to reduce them from 11 to 8.

Valencia has followed in the wake of countries such as Portugal, classified as the emerging star of education for its progress in the PISA report prepared by the OECD – which measures the level of competence of 15-year-old students in mathematics, science and reading comprehension. . In 2000, the country was at the bottom and in the last edition (2018) it achieved 492 points in Mathematics, compared to 481 in Spain (489 is the OECD average). There, within the national curriculum, they let the educational centers design 25% of the program, and they usually merge Mathematics and Physics.

In the majority of Valencian centers, the management teams ―which are free to choose which subjects to merge―, have decided that in order to achieve the objective of reducing the number of subjects, Mathematics, Biology and Technology should be given together. In others, Mathematics and Biology have been mixed. And a few have chosen to continue teaching Mathematics alone (and have to reduce subjects with other measures). The intention of the Generalitat is that this formula is maintained: next year it will be compulsory for centers to reduce the number of subjects in the first year of ESO and it will be voluntary in the second for those centers that are interested.

Alfonso Gordaliza, president of the Spanish Mathematics Committee (CEMat), affirms that they have received “the concern and disapproval of many mathematics teachers in Valencia and there is concern in the rest of the country”. Like other mathematicians consulted for this article, he begins his speech by making self-criticism: “We are aware that we must change the way in which they are taught and do it in a set way, connecting them with observable facts in real life, but associating them only with one or more Two subjects means restricting them, we run the risk of falling into a very serious reductionism of what mathematics is, ”he explains. In the first year of ESO there are contents such as the properties of powers, he puts as an example, that it is not possible to link with aspects of biology.

Gordaliza argues that mathematics requires the development by students of the capacity for abstraction, a logical reasoning that “remains within the very structure of mathematics” and for which correlations can hardly be found in other disciplines. “It is true that you have to give them an appeal to reduce this phobia that occurs among students, but we cannot stop thinking about those who want to develop in this field and want to be engineers or physicists; We can’t slow down, ”he adds.

The push of big data analytics (big data,) artificial intelligence or the promise of almost 100% employability have brought the mathematics degree to an unprecedented boom. In 2018, the double university degree with Physics required the highest cut-off mark of all majors with a 13.77 out of 14 (Mathematics was 12.68). In 2016, there were a million direct jobs in this branch ―6% of total jobs― and another 2.3 indirect, which meant that 10% of Spain’s GDP was linked to mathematical activity.

The 2006 education law (the LOE, approved by the Socialists), already contemplated the possibility that the autonomies enabled the centers to work by areas mixing subjects in the first year of ESO. The Lomce (approved by the PP in 2013) extended to second of the ESO and the Lomloe (approved last November by PSOE and United We Can) extends it to third. Some autonomies such as Galicia, Aragon and Catalonia have activated this model on an experimental basis in some groups, but the Valencian Community has been the first to approve it as mandatory. The curricular reform that the ministry is preparing goes in that direction: thinning the contents would facilitate the fusion of subjects. Although the decision to do it or not rests with the autonomies.

The discontent on the part of the teachers in Valencia has led the Department of Mathematics of the Lluís Vives public institute, one of the oldest and most emblematic of the community with about 1,000 students, to request in writing the management team to remove the Mathematics from the project of teaching areas and the next course will allow them to give them alone. “Most of the teachers are not satisfied, Mathematics is diluted and becomes a mere calculation instrument to support other subjects,” explains Raquel Calvo, head of the department. The idea of ​​giving them together involves finding the points of union: looking for what contents of Biology or Technology can be explained through mathematical operations at the level of the students.

Both the OECD and the EU have urged member countries to work for skills in schools, which translates into simulation in class of everyday life situations that reflect the interests of students. This competence approach is indicated above all to give the most complex subjects a more practical aspect. Hence, work by areas is recommended, which necessarily leads to correlating different subjects and multidisciplinary work. César Coll, Emeritus Professor of Evolutionary and Educational Psychology at the University of Barcelona and one of the experts chosen by the ministry to design the new curriculum, argues that “it makes no sense to discuss the reform of the learning model by sector, it no longer corresponds to this time ”.

Faced with this vision, a weighty argument of teachers is that mathematics constitutes in itself a language, that of science, and therefore needs its own space. Luis Rodríguez, president of the education commission of the Royal Spanish Mathematical Society (RSME), exemplifies: “It happens as with Language, that the other subjects need a good base to build a discourse, for example, to express themselves well in History It is important to know what is behind a sentence, its grammatical structure. Mathematics convey scientific language, I think we have enough arguments to consider them special ”.

In Valencia another problem is that in some centers the lack of teachers has led Mathematics teachers to take on the Biology part. There are cases like Rosa – who does not want to give her last name -, a mathematics teacher in two groups of first year ESO in a public institute. “The management team has imposed it on us without training us. I have found myself suddenly with seven hours of this double subject a week when the last time I looked at Biology subjects was in my high school ”, he explains. There are many doubts that students do not know how to answer. “Now we are with the protist kingdom: fungi, algae … I only have the help of the therapeutic pedagogue of the center two hours a week who comes to help students with learning needs, and sometimes the Biology teacher enters their free hours to give me a hand ”.

In other centers, such as the IES Albal, in that Valencian town, they have achieved co-teaching: two teachers at the same time in the classroom, one in Mathematics and the other in Biology. Of the 15 topics that make up the Mathematics syllabus, Josep Martínez has only managed to find content related to Biology in four of them. “We study the cell and with Mathematics we make the scale … statistics, proportionality or the use of decimals can be correlated, but this fusion has been difficult for us to understand.” In the summer he and the biology teacher sat down to structure the new merged teaching units. Of the seven hours of the subject per week, two are used to teach the two subjects separately.

Precisely that teamwork is another of the objectives pursued by work by areas, argues Miguel Soler, regional secretary of Education in the Valencian Government. “If each teacher keeps giving his or her own thing, we will never achieve the most practical, real-life-based competency approach. It is a way to change the culture of teaching work ”. According to the results of the report an 2019 of the OECD, Spanish teachers are among those who least collaborate and work more in isolation in their classroom. Only 24% state that they participate in a collaboration network to design teaching plans or share pedagogical material, compared to an average 40% in OECD countries.

Death of Michèle Léridon, figure of journalism and AFP

Michael Jackson, according to judge, not worth $ 400 million upon death

The subway conductor who survived the tragedy of Line 12: “You never expect something like this to happen to you”

Greece pushes refugees back to sea; this Noor shows how that goes

Those times when the left was pretty

Michael Jackson, according to judge, not worth $ 400 million upon death

About Bea Fanjul and Ayuso and the end of the campaign

Covid-19: the psych package for children and adolescents will come into force at the end of May