Champions League: against City, Paris drank the chalice to the dregs 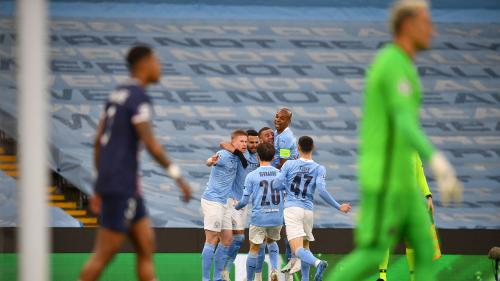 Eager to win the Champions League for the first time in its history, Paris Saint-Germain will have to wait one more season to achieve their wildest dream. Condemned to the feat after a defeat at home in the first leg against Manchester City (1-2), the Parisians were unable to reverse the trend on Tuesday, May 4, at the Etihad Stadium. Defeated 2-0, Mauricio Pochettino’s players fail at the gates of the final.

The atmosphere in Manchester was reminiscent of that of Munich on April 7, when Paris achieved a resounding feat by winning on Bayern’s lawn under the snow (3-2). On Tuesday evening, hail struck Manchester an hour before the start of the match, draping the pitch in a white veil which made it difficult for the 22 players on the pitch, especially in the first half. Despite these similar conditions, PSG failed to repeat their Bavarian performance and this time slipped.

Deprived of a Kylian Mbappé still embarrassed by an injury to the right calf and replacing at the kickoff, the Parisians had entered the match, with the intention of going to press loudly the Citizens. After the first ten minutes, PSG realized that these good intentions would not be enough to snatch qualification. Even more when Manchester City opened the scoring thanks to the opportunism of Riyad Mahrez, the kid from Val-d’Oise already decisive in the first leg (11th).

13 – No player has touched as few balls as Mauro Icardi (13) during the 1st period of Manchester City-Paris. Barbecue. #MCIPSG pic.twitter.com/aI1LXVTwzQ

Apart from two big chances by Marquinhos, whose head hit the crossbar (17th), and Angel Di Maria, whose curled shot went right next to the goals abandoned by Ederson (19th), PSG encountered the greatest difficulties in destabilize City’s defense. Ruben Dias, the Portuguese central defender that the France team will meet at the Euro, disgusted the Parisian attackers to the point of finishing man of the match. Neymar found himself caught on numerous occasions by the Citizens. And he was not helped by an invisible Icardi and a Di Maria well below his level of the first leg and excluded for a dangerous tackle on Fernandinho (69th), found himself caught on numerous occasions by the Citizens.

The latter, led by a Guardiola who generally makes possession of the ball an act of faith, agreed, for an evening, to undergo the better to bite against. Phil Foden had been dangerous in this way after returning from the locker room (54th), before serving Mahrez perfectly for the Algerian’s double (63rd). Completely muzzled by the English defense, Neymar and his teammates were unable to return to the match and worry the Mancunians, and even suffered in the last quarter of an hour.

If the Citizens can thank the Providence on three of the four goals of this double confrontation, the Manchester City team still showed a clear superiority against the Parisians, especially defensive. The English club will play on May 29 in the first Champions League final in its history, against Chelsea or Real Madrid. For PSG, it will be necessary to come back.

Anti-piracy law, instructions for use

Seven years of seeking international support for the ‘procés’

Libya: show of force by an armed group in Tripoli

Anti-piracy law, instructions for use