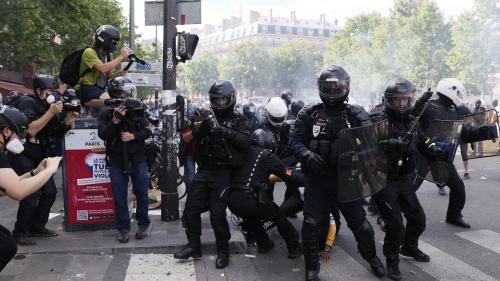 A report, commissioned by the government last December and submitted on Monday, May 3 to Prime Minister Jean Castex, concludes “to a strong degradation” relations between journalists and law enforcement “from a decade” and make 32 proposals for “remedy this situation.”

“When two actors so essential to the democratic life of the Nation come into conflict, or are afraid of each other, we must act”, explains the report, which adds that this deterioration in relations can be seen in particular “during demonstrations, subject to strong tensions.”

Among the many proposals, the report recommends first to “guarantee the physical safety of journalists in demonstrations in all circumstances, allowing them if they wish to stand behind the lines of the police.”

The report also recommends “clearly remind the police that they cannot in principle oppose the capture of images or sounds of the operations they carry out in public places, nor a fortiori ask for the deletion of such recordings”, as well as “systematize the recording, by the police, of their own operations.”

Regarding the controversial article 24 of the global security law, which provides for limiting the possibility of dissemination of images of the intervening security forces, the report recommends “send clear instructions to the police, reminding them that these provisions have no impact on the possibility of recording their image.”

This report was drawn up by an independent commission chaired by the former controller general of prisons Jean-Marie Delarue. It was introduced last December to rewrite article 24 of the comprehensive security bill before the government reoriented its work. To write this report, she heard from a large number of journalists and law enforcement officials.

In a press release, Matignon announces that the government “has now instructed the Minister of the Interior and the Minister of Culture to jointly initiate the work which will lead to the implementation of all of these recommendations.”

Bárbara de Regil butts her mother; “This is how we get along”, he explains

The essentials on the Covid-19 crisis

The essentials on the Covid-19 crisis

Neither servers nor served